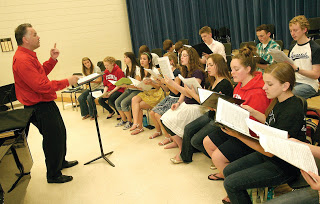 It will be the opportunity of a lifetime for 26 Wayzata High School students, when they travel to, and perform at the Edinburgh Fringe Festival in Scotland, August 15 to 29. It will also be the encore performance for their instructor, Joan Potter, who retired this spring from Wayzata Public Schools.

With so much significance packed into the trip, it is only fitting that the performance holds as much sensation as well. Potter has chosen “The Nightingale,” an opera based on the fairy-tale by H.C. Andersen. It will be its European debut.

Being selected for the Fringe Festival is also an incredible honor and speaks volumes about the quality of the WHS theater department. Approximately 1,500 schools were recommended to apply and only 64 schools from the U.S. were selected to perform. Over 15 years of the Fringe Festival, only 15 Minnesota schools have been accepted to perform at the event. Potter said the WHS theater department received its recommendation by Greg Sawyer at the Academy of Holy Angels. Potter then sent in an application that included awards the theater department has won, a list of the shows it has performed, the philosophy of the program and a written application.

For the students, it will be a unique experience that will prepare them for future theater productions in high school, college and their professional future. Scot Missling, a senior next year, said it would be a life-changing experience to see the different cultures at a global festival. While he doesn’t see himself working professionally in theater in the future, he said the trip would be an incredible part of a college application.

The WHS students will be performing their opera in an old church in Edinburgh that seats approximately 300 people. Three benefit performances have been scheduled locally as practice for the students and a chance to raise money for the trip. The cost for each student to travel to the Fringe Festival is approximately $5,800. The shows will be held 7 p.m. Saturday, Aug. 1, at Woodridge Church in Medina; 7 p.m. Sunday, Aug. 9, at Wayzata Community Church; and 7 p.m. Wednesday, Aug. 12, at St. Phillip the Deacon Church in Plymouth. These performances are free but donations are welcome and all proceeds will be used to offset the cost of the trip for students.

The performance features very little scenery in order to travel to Scotland. Potter said the show had to use a minimal approach because the troupe needs to carry everything with them on the plane. It does feature period authentic costumes and a tremendous vocal performance on the part of the cast.

“You actually feel like you are in the time period for it because you are sitting in it,” junior cast member Maddie O’Brien said. “You need to come and experience it because it’s so much deeper than you would expect.”

But if for no other reason, O’Brien said the show should be watched, “because it’s Potter’s last show and it’s amazing how good she can make the students look.”

Photo of students rehearsing for the Fringe Festival courtesy of Wayzata Public Schools.