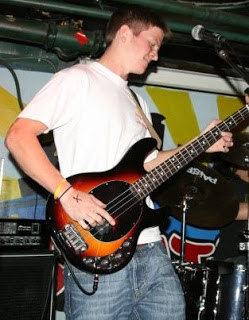 Wayzata band Flow and the Mingos won the Jam Solid Productions battle of the bands at the Dinky Towner on April 13th, earning them a spot in the finals with the possibility of their own tour. Flow and the Mingos consists of Kevin Coughenour (Grade 11, bass), Mike Drasher (Grade 11, drums) and Sarah Walk (Grade 11, keyboard and vocals). "We have been together as Flow and the Mingos for about 2 and a half years now," said Coughenhour. "We started off just playing at friends’ parties.

During the summer we played at Parkers Lake and participated in a few battle of the bands that we actually did pretty well in. It’s been in the past four or five months that we have been getting more shows." "Jam Solid Productions contacted us about this contest over Myspace. We didn’t know much about it, but we decided to give it a try," said Walk. When the band arrived at the Dinky Towner they were a little surprised by how things looked on the outside. "It looked really small from the outside, turns out most of it is underground," said Walk. "It was really cool though, there was a really wide variety of people."

There were about 20 to 30 Wayzata students in the crowd waiting to support their friends. "It was a big turn out, we were really thankful to all of the fans that came to support us," said Drasher. "This show was the most energy filled performance we have had."

Once the band took the stage all of the fans realized how thankful they were that they came. "I don’t know who Flow is and I don’t know who Mingo is, but I’m sure they would have been proud because the show was epic," said Josh Vicary (Grade 12). "This was the best show they have had yet," said Dana Ness (Grade 11). Two days after the show, Walk received an email informing them that they had beat the other, much older bands that they had played with on Sunday. "We were pumped when we got the news," said Coughenhour.

The band will go on to play in the finals at the Varsity Theater in Minneapolis. A date has not been finalized, but the band is excited for what could come of it.
Said Coughenhour, "The prize is awesome: $400, 20 hours of recording time, and the possibility of a tour!"