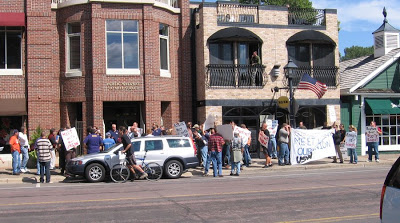 What appeared to be 30-40 United Steel Worker protesters marched on Minnesota based Wayzata Investment Partners today over wage disputes in a newly purchased paper mill dispute. The Pope & Talbot paper mill in Halsey, Oregon was purchased in a bankruptcy auction by W.I.P and renamed Cascade Pacific Pulp. Workers were fired and made to reapply for their jobs at reduced wages and with less insurance benefits. Local United Steel workers protested on behalf on the Union at the mill. The union delegation seeks a meeting with Wayzata Investment Partners boss Patrick Halloran and wants him to halt the company's unfair demands on workers and their community.

The Wayzata Police Department was out in full force and ready for anything as neighboring officers, squad cars and buses were sent from Plymouth, Minnetonka, Orono, Mound, Eden Prairie and the Hennepin County Sheriff Department. The march lasted for about an hour, with the group of protesters chanting "We'll be back" over and over again as they began to disburse.

Wayzata.com is your protest on Lake Street leader, so stay tuned for more information.