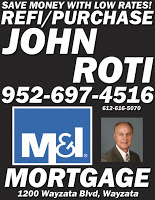 Another spring week in Wayzata brought plenty of smiles to faces as people strolled Lake Street with temperatures above 50 degrees last week. The City Council weighed some East Neighborhood traffic plans, Tom Petters continues to make headlines in his fraud case, and much, much more. Here are the Top 5 Stories of last week, just in case you missed them:

Today's Top 5 is brought to you by: John Roti at M&I Mortgage, and Jon and Kathy Wright at J&K Creative for all your portrait photography needs.

Read about the March 2009 "The Portal" from the City of Wayzata. It has a mention of Wayzata.com as the City wrestles with the best way to clarify their website address.