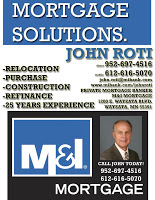 It was a little slower week in terms of the news cycle in Wayzata, but that doesn't mean there wasn't anything going on. A big time fraud case continued to generate headlines, the local body of goverment canceled a regular meeting due to lack of activity, and a local hockey team exited the section playoffs. Here we go, the Top 5 Stories of the week in Wayzata for February 23 - March 1, 2009. Brought to you this time around by John Roti at M&I Mortgage - for all your residential lending needs.

Two other notes for you: Wayzata.com had a productive week as it joined the Minnesota.com network, and had John Roti of M&I Mortgage come on board as a sponsor. If you would like to spread your message to the Wayzata Community and the thousands of visitors that read Wayzata.com with simple and cost effective pricing, please contact Dan at 952-473-5800.