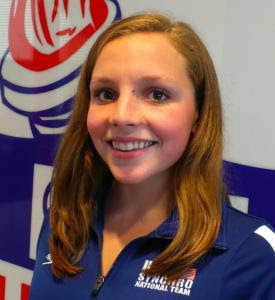 Wayzata Synchronized Swimming has won the State Title for the last two years in a row. The current Wayzata swimmers have some large shoes to fill as a number of the standouts that contributed to the championships have graduated. One of those swimmers Wayzata is looking to as a leader, is Sarah Urke, a sophomore who is being considered for the U.S. National Junior team, according to the Star Tribune.

Here is some more info from the Wayzata Athletics office on Sarah and written by Joanne Kutzler, Head Coach Minnesota Synchronettes:

Sarah Urke, a sophomore at Wayzata High School, was named to the first 13-15 US National Team at the US Olympic Training Center in Colorado Springs in July and represented the United States at the 2008 UANA Pan American Age Group Championships held in Calgary, Canada on August 27-30. Sarah is the first Minnesotan to have earned this honor with this age group team.

The new US Team trained rigorously at the Olympic Training Center in Colorado Springs for several weeks prior to the international competition. Twelve countries from North and South America competed in the Championships which are held every other year. The US Team placed a very respectable second behind Canada and Sarah placed 22nd (5th among US members) in the figure competition.

Sarah had been participating as one of the top athletes in the United States Talent ID Program for over a year. After placing 7th in Solo and 7th in Figures at the recent US Age Group Championships in New York, she was invited to the Olympic Training Center for final selection of the first 13-15 National Team.

Sarah has been a member of the Wayzata High School Varsity Synchronized Swim Team for three (3) years which has won the State High School Championships for the last two years. She also has been competing in synchronized swimming for eight (8) eight years as club swimmer with Minnesota Synchronettes which practices in Wayzata.

"Sarah is a gifted swimmer who has an unbelievable work ethic and clear goal of what she wants to achieve - making the US Olympic Team. With her success nationally she could rest on her laurels, but she comes to the high school team using the same work ethic to help the Trojans become one of the top synchronized swim teams in the state," said Wayzata High School Synchronized Swim Head Coach Signe Hensel.

Her Scholastic Honors and Awards include:
2005-2008 A honor roll and
Midwest Academic Talent member
2007 Presidents Award for Outstanding Academic Excellence