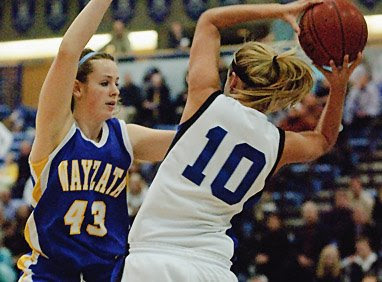 The Wayzata girls basketball team wanted to leave no doubt as to who was the better team when they collided with the Minnetonka Skippers in the quarterfinals of the section 6AAAA tournament. The Trojans acommplished that goal by jumping out to an early lead and cruising to a 60-41 victory.

With 9:45 remaining in the first half, the Trojans led 17-4 with Thompson doing most of the damage.

The Skippers hung around for awhile, but when the Trojans got a three pointer from senior Alexa Clausen and a lay-up by Grossfeld with 3:30 left in the first half, the lead had swelled to 15 at 27-12.

Thompson hit a bucket just before the halftime buzzer and the Trojans went into the locker room up 31-17.

It didn't take long for the Trojans to extend the lead out to 20 in the second half. With eight minutes remaining in the game the Trojans put a final nail in the Skippers' coffin when Kuhn hit a three pointer and Thour converted a steal into a fast break lay-up to put the Trojans up 51-29.

The Trojans will have two days to enjoy the victory and then its back to work against the top seeded Hopkins Royals in the section semifinals. The Royals dispatched the eighth seeded St. Louis Park Orioles 78-27 in quarterfinal action on Wednesday. The Royals and Trojans will meet at 12 p.m. on Saturday at Osseo High School.