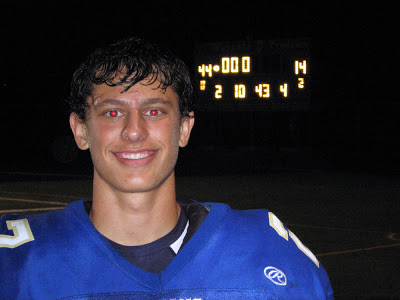 PLYMOUTH, MN: Garrett Englehardt made Wayzata's homecoming night by scoring 3 touchdowns as the Wayzata Football Trojans (4-0) ranked number 2 in the Metro Top 10 defeated the Apple Valley Eagles (3-1) who are ranked number 4. The game was covered by the Pioneer Press, MSBN via http://www.mnsportsnetwork.com/, and Channel 12 in addition to Wayzata.com.

Apple Valley started at their 26 and ran a run, then went to the pass. Paul Hoffer stepped in front of a Boomer Hermes matron pass and took it to the 19 yard line of Apple Valley. Garret Englehardt and Kevin Knight played a little smash mouth run football to bring Wayzata to the Apple Valley 6 yard line. Chris Kroeten was stuffed for a loss, bringing it to the 11 yard line. The Trojans threw it Cecil Doe to bring it to the 4. Kevin Knight brought to the 1 on 3rd down, and Garrett Englehardt punched the ball in to give Wayzata the early lead at 7:57 1Q. David Stranghoener added the extra point. Wayzata 7, Apple Valley 0.

Apple Valley started at their own 26. Hermes bootlegged to the right to lose 5 yards on one play, and a little flip into the flat netted nothing for the Eagles. The Eagles center Erik Jensen snapped the ball over the head of Eagle punter Thomas Obarski and out of the back of the end zone to give Wayzata a 9-0 lead with the defensive safety.

The ensuing kickoff ended up out of bounds and the Trojans started their first drive at the Eagle 45 yard line. Starting with the short field, Wayzata kept the ball on the ground for the first couple plays and a pass to Fritz Rock gave the Trojans a first down at the Apple Valley 34. A deep pass attempt to Nolan Odlund in the end zone fell incomplete. Chris Kroeten scampered up the field to the 19 yard line for another Trojans first down. A couple Trojan carries for short gains, a slant to Matt Tarpley to bring it to the 5, and Englehardt again punched it in for the Trojans. 16-0 2:56 1Q.

The Eagles started well inside their own 20, took a couple of losses on a sack and a run, ran a screen to get 3rd and 9. Boomer Hermes threw a long bomb to Ray Watson for 69 yards to make the score 16-6, and a pass to David Bauer from Hermes for the 2 point conversion made it
16-8. 1:10 1Q.

Jack Egan took the kickoff to the 36 from his own end zone. Chris Kroeten scampered up the field for first down. Chris Kroeten fumbled on a long run and was stripped of the ball by Marcus Burrell.

Apple Valley punted the ball to Wayzata to begin the 2nd quarter. Wayzata struggled to move the ball with a short run and an incomplete pass to Cecil Doe. A screen to Cecil Doe to combat the hard charging was nullified by a holding penalty. Derek Vonnahme sacked Reis, and the Trojan punt was returned to the end zone by Varmah Sonie to make it 16-14. Trojan Robbie Heflin kept an Eagle wide receiver out of the end zone on the two point conversion attempt. 16-14 with 9:34 remaining 2Q.

The Trojans started at their 21 and Ries played pitch and catch with Fritz Rock for a substantial gain. A couple of short runs from the Trojans, and long attempt from Ries to Doe made it 4th down for Wayzata. Wayzata punted to Apple Valley.

Apple Valley struggled to get anything going the next set of downs and punted it away, and Wayzata started at their own 30.

An uncovered Adan Hassan picked up eight easy yards on a pass from John Ries. Ries and his offensive line pushed through a 3rd and inches.

Ross Giangrossi made a monstrous sack to bring up 3rd and 23 for the Eagles. The Trojans defense stiffened.

Wayzata came out in their 2 minute drill throwing. An attempt by Ries to Doe for a long ball was overthrown. Nolan Odland caught a laser. Cecil Doe made a circus catch by using his forearms to have the the ball end up in one arm at the 5 yard line of Apple Valley. The Trojans used 3 plays to try to get it into the end zone. Faced with a 4th and goal with 5 seconds left, the Trojans used a play action pass from Ries to Englehardt to put the Trojans up 23-14 at the half.

The Trojans started the third quarter with the ball and came out throwing. A couple of short passes from Ries to Tarpley and the Trojans had to punt.

Apple Valley with a short field at their own 40 yard line. Connor Grill of the Trojans made a great sack to force the eagles to 3rd and long. The Trojans Paul Hoffer made a great play on a long ball from Boomer Hermes, and the refs called an outrageously bad defensive pass
interference. Apple Valley continued to throw without much success. They punted and Wayzata took over at their own 28 with 8:26 remaining in the 3rd quarter.

Apple Valley started their next drive at their own 45. Tevis Wilson scampered around the end, and then the Eagles got a false start. Logan Moorse made a nice catch to make 2nd and short.

Trojan Carl West made a monstrous sack on Eagle Hermes.

Wayzata's next offensive series was ineffective as the Trojans continued to grind the Eagles. The Eagles play their skill position players on both sides of the ball, and the question on every one's
mind was could Apple Valley mount a sustained attack against the Trojans for 4 quarters.

Jack Eagan intercepted a Boomer Hermes pass on the 22 yard line and returned if for a touchdown, to put Wayzata up 29-14 with 5:51 left in the 3rd Quarter. David Stranghoener added the extra point to make it 30-14.

Wayzata's Robbie Heflin made an interception for the Trojans as the Eagles tried the old punt fake to try to get themselves back in the game.

Ries threw a corner route to Adan Hassan for 17 yards and a touchdown to make the score 36-14 Wayzata with about 12 minutes left in the fourth quarter. David Stranghoener added the extra point to make it 37-14 Trojans.

The Eagles did nothing with their next possession and punted to the Trojans 38 yard line.

Wayzata was now in clock killing time with under 9:00 minutes to play in the 4th. Too bad they couldn't convert a first down.

The Eagles kept trying to throw their way out the hole they were in and weren't having much luck.

Chris Kroeten broke off a long run to dash any hopes the Eagles may have had to make it 44-14 in the fourth quarter with 6:28 remaining to make it all but official.

Garrett Englehardt reflected on his three touchdowns: "The first one was about a a five yard run, I just went through the hole and it opened up. The offensive line did great tonight. The second one was a dive to the left, and the hole opened up again... I got through, hit the safety, and fell into the end zone. [The touchdown catch] is one of our favorite ones to run in practice, the running backs gather together to run that play, it just so happens that Coach pulled it out at the end of the half to try and see if we could get a score, I went through, did the motions, and caught the pass for a touchdown."

Coach Brad Anderson told his players after the game, "I told them I was really proud of the way they played, and I said we beat a good club tonight. We knew it would be a tougher game, we had some adversity during the week, we had some players injured, and guys just stepped up and made plays and that's what it is about. Defensively, we had a couple of guys that played out of position. A couple of our cornerbacks, Robbie Heflin, moved from corner to outside linebacker. He did very well. It was nice to see John Connely, who is normally a safety, came down into the box and played linebacker for us tonight. He was playing with a sprained ankle tonight. Grant Olson, [was] pretty dinged up, didn't practice the whole week. Yesterday we were practicing, and Coach Lombardi through out a 3-1-7, 3 down lineman, 1 linebacker, and 7 defensive backs. They did a great job of just hanging together, glueing the pieces together, playing a very good club, they did well."

Stay Tuned to Wayzata.com for a full media report on Wayzata Football 2008 versus Apple Valley.