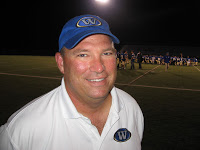 Wayzata Football Head Coach Brad Anderson joined me for the Final Word on the Armstrong Falcons game and to Preview the Apple Valley game scheduled for September 19th, 2008 at 7:00 at Wayzata Stadium.

Dan Gustafson: Congratulations on your win over Armstrong.

Brad Anderson: Thank you. The score got a little lopsided there in the second half, but even thought we didn't put a lot of points in the first quarter I thought defensively we played well right from the start and that's what you like to see.

DG: What did that win mean to your team?

BA: It meant we are one step closer to winning the conference. It's important for playoff seeding because of Armstrong being in our same section. The other thing is it gives a chance to look at a number of different kids with the game still in doubt and we got to see how they reacted under varsity experience. So that was good.

BA: I thought we were erratic. Offensively, when we watched the film, we thought we did pretty well up front, I thought our backs ran hard, and I thought our receivers ran good routes. The disappointing part was that we did fumble the ball a couple of times in the first quarter and against good teams, teams of equal talent and whatnot, they are going to take advantage of that. That's the third week in a row that we have fumbled balls and that has been a point of emphasis for us this week.

DG: What did you see defensively as you watched the film?

BA: Defensively, we are just getting to the ball really quick. We had a number of tackles for loss, over the course of the night there were very few positive yardage plays for Armstrong so that tells you that we're not big so we play with a 100 miles an hour attitude and that means some lost yardage plays. I thought our defense did a great job of playing the run yet also covering receivers.

DG: Your team has come up with a number of interceptions, that's been great!

BA: There has been a real history since Matt Lombardi has been our defensive coordinator. There's been a couple of years that we have had close to 30 or 30 interceptions which is unheard of at a high school level. He really works on creating turnovers. He'll even give up some yards a couple of times in order to try and get a defensive pick type of play. He schemes for it, the players are aware of how important interceptions are and how they impact the game. He does a really good job of getting all the players to buy into the fact that when the ball is in the air it's any one's ball at that point. I think we come down with it as often as the offense does.

DG: What offensive plays stood out to you from the Armstrong game?

BA: To me, I thought Cecil [Doe's] catch along the sideline got us going, he made a really nice catch when we had had a couple of drives but really hadn't put up any points. We got the ball early in the second quarter, and he runs an out and up and kinda left his guy behind him and really got us deep down into their zone. The next play we followed it up with a touchdown pass to [Matt] Tarpley. His deep catch started the game, I thought we had a nice slant route to Fritz Rock where the audible on the line of scrimmage, when they had different coverage than what we were expecting, and our quarterback clicked off an audible, everyone picked it up, he ran a slant and caught if for six. I thought that was really nice. I thought we had a nice inside zone run where Kevin Knight really accelerated through the hole and finished into the end zone. Those were the three plays that stood out in my mind.

DG: There were so many offensive plays that resulted in touchdowns that it is hard to remember back even as I look at my notes because there was just such a flurry of activity.

BA: Yeah, and the other thing I have noticed is that, this has been kind of a, it seems like we are rapid fire. If we get on a roll we can put up two or three scores in a very short period of time. I kinda put that again to our defense, if we can get a touchdown, his whole philosophy is, on the defensive side of the ball, let's stop them in two or three plays or less and get the ball back for our offense. A lot of times you will see us score in bunches and I think that's because if we can get on someone offensively we are going to go and try to again, and defensively we are going to try to get the ball right back for our offense to get on them before our defense can recover--almost like a flurry of punches. Sometimes it does become a blur.

DG: You take on 3-0 Apple Valley this weekend, they are in the Top 10 in the Metro Poll, what have you seen on film about Apple Valley, and what can you tell the Wayzata Community about them?

BA: They come from a tradition of great football. Everyone knows Apple Valley wrestling, but even before wrestling they had a great football tradition. They have been two time State Champs. They are in a very tough conference, the Lake Conference, so they play good opponents week in week out. Watching them on film, defensively, they remind me of Minnetonka only quicker. They have four defensive backs who cover very well, they really get off blocks and pursue the ball well. They are a good defensive club. Offensively, they take those good athletes who play defensive back and and turnaround and play them at wide receiver and running back. They spread you out and give you difficulty on both the run and the pass. We are going to have our hands full this week. They are well coached, and are a nice solid club all the way around.

DG: There guys play both sides of the ball?

BA: Their skill players, wide receivers and defensive backs play both ways quite a bit. They have a couple of lineman who play some both ways, but not every player will play both ways obviously. Their really good skill players, they make sure they either throw the ball to them or they are defending when the ball is thrown. They get full advantage out of their athletes.

DG: How important is this game in your schedule to your team?

BA: I think the game is very important in the fact that it is a top level team and you always want to check how you are doing against top level teams. When you get to the playoffs, a round or two, you are typically playing the best teams at that point, and that is when you have had to have competition at that level to really step up and make plays. We see it as a game that helps us for our playoffs, we would obviously love to win it, because it would help us with our section, and continue the trend that we are doing. More than that playing a good club like this will expose weaknesses that we have and let us make corrections while it is early enough before the playoffs come around.

DG: What have you been doing offensively to prepare?

BA: Our run game is pretty simple. We have looked at our running game this season and simplified our blocking schemes to the point that we don't really have to practice a lot of different scheme against a lot of different fronts. We can just really work on the base plays that we have. That has allowed us to be a little more creative with some formations and some pass patterns that we are running. So what we try to do is give teams different formations and run some of the base plays out of those different formations. Off of that we are going to try to play action pass and try to find ways to get our best receivers one on one with defensive backs. So far it has worked pretty well for us.

DG: How has your team been able to build on the victories so far this season?

BA: We have been able to plug some players in from week to week. We haven't put out the same lineup either offensively or defensively two weeks in a row, and yet the guys we have plugged in have done a great job and continued to execute at fairly high level. Hopefully by the time we get to the end of the season, most of our players will be healthy, and we'll have some depth and continuity. That is the biggest improvement we have seen during the season.

DG: Well thanks again for your time Coach, and congratulations on your victory over Armstrong. We will be watching Apple Valley and we wish you all the best.

BA: It should be a great night for a football game.