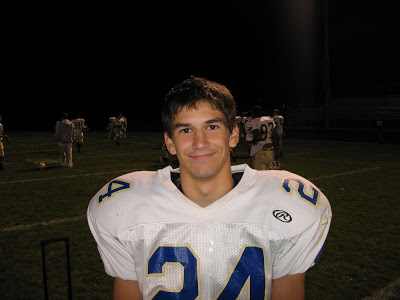 Defensive Back Chris Meyers intercepted 2 passes and returned them for touchdowns as Wayzata soundly beat an overmatched Bursville Blaze. Garret Englehardt scored 2 rushing touchdowns in the effort as well, and Daryl Brown returned a punt for a touchdown. Wayzata’s extremely stout defense kept the Blaze offensive unit in check all night.

Burnsville starts at their own 32 yard line. A Blaze handoff turned into a fumble on their very first play. Wayzata recovered and started at the 32. Trojan quarterback John Ries threw a quick little pass into the flat to Ryan Macgregor for a chunk of yards. A Trojan run netted 8 yards. A follow up run with Chris Kroeten picked up no yards. Garrett Englehardt scored from the 7 yard line on a dive to the left. David Stranghoener added the extra point to make it 7-0 with 10:17 left in the 1st.

Burnsville punted to Trojan Daryl Brown who received the ball at the 45 yard line and took it up his right hand side for an uncontested return for a touchdown. Stranghoener added the extra point to make it 14-0 with 8:15 left in the 1st quarter.

Burnsville started at their 33 yard line with a quick flip to the left from Jones to receiver Steve Lembke for no gain. Wayzata picked up a second offside penalty to give Burnsville their initial 1st down. Jack Egan sacked Jones for a 17 yard loss to make it 2nd and 27. A run by Francois Thompkins netted a couple of yards, but brought out the punt team again.

Wayzata started at their own 48 yard line. A Ries pass to Tarpley fell incomplete. An attempt long down the field to Adan Hassan toward the corner of the end zone did not connect as well. Another toss to Hassan also fell incomplete as Coach Anderson tried to fine tune his passing game.

Burnsville took over at their own 21 yard line. Jones threw a pass to Tyler Hiebner to the right lost a yard. A handoff to Thompkins netted mayber a yard to bring up 3rd and 10. A long pass attempt by Cam Jones was intercepted by Daryl Brown to give Wayzata the ball at their own 40 yard line.

A quarterback keeper by Trojan QB Matt Tarpley picked up a bunch of yards. Chris Kroeten picked up 45 yards on an end around to bring the Trojans to the Blaze 11 yard line, threatening to score again. A motion penalty made it 1st and 15; Englehardt picked up 11 yards on the next play. Ryan MacGregor picked up 2 yards to make it 3rd and 2 on the 3 yard line. A Kroeten run up the middle resulted in no gain. A pitch to Englehardt to the left made it easy to score the Wayzata Touchdown. Stranghoener added the extra point to make it 21-0 with :32 left in the 1st quarter.

The Blaze started at their 28 yard line. Cam Jones threw a nice out to Devon Knopke picked up a first down. AJ Tarpley made a tackle in the backfield to keep Burnsville from gaining any yards. A pass attempt by Cam Jones to Corey Babcock bounced up into the air and Chris Meyers picked the ball off and returned it 45 yards for a defensive Trojan. Stranghoener added the extra point to make it 28-0 with 10:53 left in the 2nd quarter.

Burnsville started with 1st and 10 on their own 19 yard line. Thompkins rush attempt was stuffed by Ross Giangrossi for a loss of 1 yard. An illegal procedure by the Blaze made it 2nd and 16. Carl West sacked Cam Jones for an 8 yard loss to push the Blaze back to their own 5 yard line. A quarterback draw was stuffed by Chris Meyers, to bring out the Burnsville punt team.

Wayzata’s Daryl Brown returned the punt from Burnsville to the Blaze 10 yard line. A Ries slant attempt did not connect with Cecil Doe. Englehardt’s counter to the right netted 6 yards, as the Trojans threatened again. A nice roll out and pass from Ries to Eren Cur scored another Trojan Touchdown. Stranghoener added the extra point to make it 35-0 with 7:22 left in the 2nd quarter.

Burnsville started at their 26 yard line, and got a penalty for a chop block. A drop back by Cam Jones resulted in a throw away as he ran for his life. A Jones pass from the end zone was intercepted by Chris Meyers at about the 20 yard line who again returned it for a touchdown. Stranghoener added the extra point to make it 42-0 with 6:54 left in the 2nd quarter.

Burnsville started their next drive at their own 46 yard line. Steve Lembke stepped in at quarterback for the Blaze. His first pass attempt fell incomplete. A reception by the Blaze and the 2nd personal foul for 15 yards made Coach Lombardi take a time out to regroup his defense. With the Blaze at the Trojan 29 yard line, Lembke tried again down the left field line but the Blaze receiver was out of bounds. Kevin Potas put an exclamation point on a sack to make it 4th and forever. Burnsville had a real need for blocking. A fake punt and rush for 30 yards by Blaze punter Tom Sherman turned it over on downs to the Trojans.

Chris Kroeten and the Trojans picked up 3 yards from their own 33 yard line. Englehardt got another 4 yards to the left of the massive Wayzata offensive line. A slant from Ries to Adan Hassan netted 20 yards to bring the Trojan into Blaze territory. A Ries attempt to Tarpley fell incomplete. A handoff from Ries to Englehardt netted a few yards. Ryan Macgregor punted the ball to the Blaze 5 yard line and the Trojans downed it.

Burnsville’ Thompkins picked up 5 yards. A Lembke screen pass was tipped by AJ Tarpley and almost taken into the end zone. Another Lembke pass at the sticks fell imcomplete and brought on the punt unit.

Jack Egan blocked the punt by Burnsville and Paul Hoffer fell on the ball to score a touchdown. Stranghoener added the extra point to make it 49-0 with 1:00 left in the 2nd.

Wayzata started the 3rd quarter at their own 30 yard line. Ries to Nolan Odland in the flat picked up 6 yards. Garrett Englehardt picked up 5 yards. A screen pass to Fritz Rock picked up 15 yards. Chris Kroeten dove over the middle for a nice 10 -12 yard gain. A Ries rocket to Matt Tarpley moved the Trojans to the Blaze 25 yard line. A crisp slant to Odland picked up a Trojan first down to bring the Trojans to the 9 yard line, and an Englehardt carry brought the ball to the Burnsville 1 yard line. A Ries handoff to Kevin Knight brought another easy Trojan Touchdown. Stranghoener added the extra point to make it 56-0 with 7:14 left in the 3rd quarter.

Kramer Berg took over at quarteback for the Trojans, as Chris Lindsey took the first carry for the Trojan second team offense and picked up a first down. A Berg pass to Cam Krugerud picked up 5 yards. Mac Cameron took a hand off and picked up a couple. A rollout by Berg and pass to Guy Emerson picked up another first down. Berg to Hassan picked up 8 yards. A late hit out of bounds ensured a first down to bring the Trojans to the 30 yard line of the Burnsville Blaze. A Berg roll out pass to Josh Kilgard netted 7 yards to bring it to the Blaze 6 yard line. Mac Cameron bulldozed his way into the end zone behind his big offensive line to make it 63-0 as Stranghoener added the extra point with 1:21 left in the 3rd quarter.

The Blaze started from their own 30 yard line. The Trojans kept applying pressure to Burnsville, as both runs and passes were defended well. The Blaze punt team again took the field deep from the own end zone; it was partially blocked to give the Trojans the ball on the Burnsville 23 yard line.

Wayzata QB Dan Wexler handed off to Aaron Roth for no gain. Wexler’s play action pass to Chris Lindsey fell incomplete. Roth tried again to the left and picked up a couple. Jack Vettel picked up a first down for the Trojans. Aaron Roth picked up a couple yards to the left. Another carry by Roth gained 9 yards to bring the Trojans to the 4 yard line. Jack Vettel played some smash mouth football and dove into the end zone. Stranghoener added the extra point to make it 70-0 with 6:00 left in the 4th quarter.

Burnsville started their next series at their own 34 yard line. The Blaze picked up 1 of their handful of first downs. Carson King fell on QB Matt Bane for a loss.

After the game, Chris Meyers had this to say about his 2 interceptions returned for touchdowns: "Outside linebacker Jack Egan tipped it right to me, and I walked right into the end zone, it was 40-ish yards. The second one, our [defensive] line got great pressure on the quarteback, flushed him out of the pocket, [I] just waited for him to throw it, found the ball, took it around the slower guys on the left side and into the house."

Starting Quarterback John Ries has this to say about his touchdown scoring pass to Eren Cur, "He was my first read all along... the flat was wide open right away, and [Eren] had the athleticism to get in the end zone."

Stay tuned to Wayzata.com for the full media report over the next couple of days.