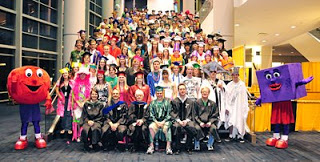 Three teams from Wayzata Elementary Schools competed in the Destination ImagiNation Global Finals last weekend at the University of Tennessee.

The Wayzata teams competing in the global finals were the ZoDIacs from Gleason Lake Elementary, the D.I. namites from Oakwood Elementary and the Superb Seven from Greenwood Elementary.

Wayzata Schools D were listed as tying with three other teams for 23rd place in the Instinct Messaging Challenge, a challenge where teams were to communicate using sound, color and movement—animal style.

The ZoDIacs were listed as coming in fourth place in the ViDIo Lit Hits challenge, a challenge for teams to retell literature through live performance.

The D.I. namites were listed as tying with five other teams for 17th place in A New Angle challenge, a challenge where teams create a structure that has angled sides, and test how much weight it can hold.

The Global Finals allows teams to represent its' state or country in an international creativity competition and to showcase the skills it has developed as a team throughout the year.

View the results, videos, photos and webcasts of the Global Finals at the Destination ImaniNation Web site: www.globalfinals.org.