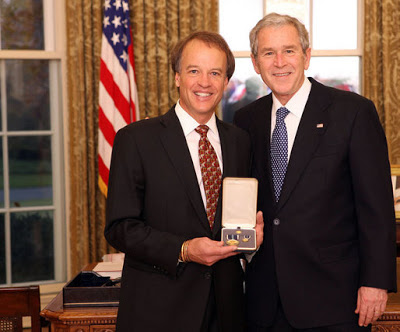 The Citizens Medal is an award that was started in 1969 to recognize U.S. citizens who have performed exemplary deeds of service for the nation, according to the White House.

It is one of the highest honors the President can confer upon a civilian, second only to the Presidential Medal of Freedom.

Ward Brehm received the award from the President along with twenty-two individuals, as well as one award which was presented posthumously.

From WhiteHouse.gov, "As a public servant, author, and humanitarian, Ward Brehm has committed himself to enhancing economic and social development in Africa. He has worked in partnership with the people of Africa to provide clean water to rural communities, fight poverty, and extend opportunity. The United States honors Ward Brehm for his work to replace disease and despair with healing and hope."