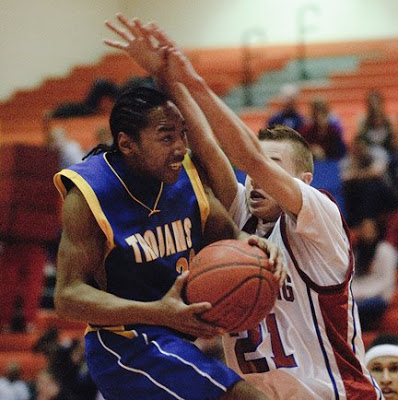 The Trojans led by six at halftime and were able hold on in the second half for the victory. As has been the case in a majority of their games this season, the Trojans had four players score in double figures. Besides the contributions from Franks and Peterson, senior Eren Cur scored 13 points and senior Kellen Taylor chipped in with ten points.

The Falcons got major offensive production from senior Damarius Cruz and sophomore Marquel Curtis, but didn't have enough weapons to upset the Trojans. Curtis scored a game high 26 points while Cruz scored 22, which is one point below his season average.

The victory sets up a section final between the Trojans and the state's number one ranked team from Hopkins. The Royals had no trouble advancing in their semifinal game against Minneapolis North as they cruised to a 102-55 victory.

The Trojans and Royals met twice during the regular season with Hopkins winning both contests by margins of 27 and 31 points. Can anyone challenge the Royals and their star-studded line-up full of division I recruits? A look at the available data and most high school basketball followers would say no.

The Trojans and Royals will battle for a spot in the state tournament at 7 p.m. Tuesday, March 17 at Osseo High School.