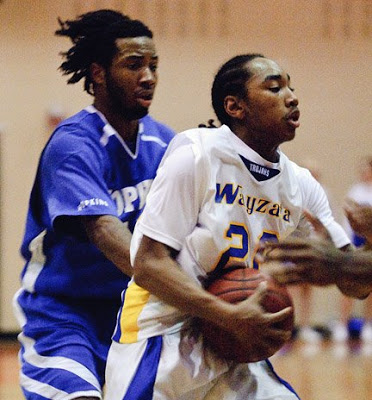 Before any games were played this season, the Wayzata boys basketball team knew it would have to find a way to beat the Hopkins Royals if they wanted a chance to play in the state tournament.

Unfortunately for the Trojans, they like every other team that has faced the Royals this season, were sent home with a notch in the loss column. On Tuesday night the Trojans saw their season come to end with an 88-68 loss in the section 6AAAA final at Osseo High School.

The Royals countered and finished the half on a 17-5 run to take a 32-23 lead into the locker room at halftime.

The intermission didn't stop the Royals' momentum as they came out on fire in the second half to basically put the game out of reach in the first couple of minutes.

The Royals hit their first five shots of the second half including three pointers by Raymond Cowles and Marcus Williams to take a 44-27 lead.

Things got out of hand from there as the Royals enjoyed a lead of 20 points or more for a majority of the second half.

University of Minnesota recruit Royce White put an exclamation point on the Royals' victory with back-to-back slam dunks including one of the alley-oop variety to put the Royals up 79-49.

Lost in the Royals brilliance was a spectacular second half effort by Trojans' senior Kellen Taylor. Taylor finished the game with 21 points, including 19 in the second half on 9-10 shooting.

The Trojans finish the season with a record of 20-7. Tuesday night's game was the last in a Trojans uniform for Taylor, Peterson, Franks, Odland, Eren Cur, and DeShawn Thurman.