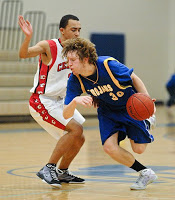 Wayzata senior Nolan Odland (pictured) led four Trojans in double figures with 24 points, as the boys basketball team improved to 13-2 on the season with a 76-61 victory over Eagan on Tuesday night.

The Trojans raced out to a 44-24 halftime lead and had no trouble securing the win in the second half. Senior Jerrod Peterson added 16 points, while seniors Eren Cur and DeShawn Thurman scored 14 and 12 points respectively.

Next up for the Trojans is a Classic Lake Conference match-up with the defending state champions from Minnetonka on Friday, Jan. 30. The Skippers graduated their entire starting line-up from last year's state championship team, but are still 10-6 this season. Game time is 7:15 at the Minnetonka High School gymnasium.

The Wayzata girls hockey team was unable to snap its six game losing streak on Tuesday night as they fell 4-1 to the Minnetonka Skippers.

The game was tied at one after the first period, but the Skippers went on to outscore the Trojans 3-0 in the final two periods to record the victory.

Sophomore forward Mackenzie Shannon scored the lone Trojans goal on an assist from junior Jenny Saxon. It was Shannon's eight goal of the season.

Senior goaltender Shelby Rasmussen made 36 saves in the loss, including 17 in the first period to keep the Trojans in the game.

The Trojans will look to snap their seven game losing streak on Friday, Jan. 30 when they host Hopkins at 7 p.m. at the Plymouth Ice Arena.