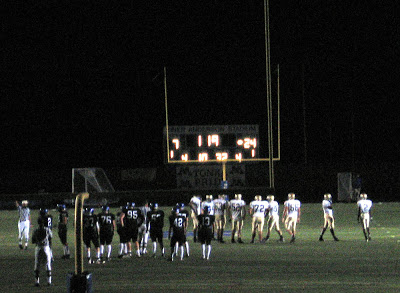 The Wayzata Football Trojans beat the Minnetonka Skippers soundly tonight in a Classic Lake Conference battle and for a top ranking in the AP Minnesota metro poll. A capacity crowd of 6,000 attended the game.

Wayzata scored on the opening possession. On a 4th down and 5 John Ries threw a 20+ yard strike to Cecil Doe to make it 7-0. Throughout the first half, Wayzata won the field position battle, the offense was well balanced, and the defense was stout.

After Minnetonka sputtered on their first possession, Wayzata fumbled the ball across the goal line on the second offensive drive and the refs blew the call allowing Minnetonka to recover for the touch back.

The Skippers again did nothing on offense, and punted from their own 20. The Trojans started with a short field inside Tonka territory. Matt Tarpley threw a perfect touchdown pass to wide receiver Cecil Doe to make it 14-0 Wayzata.

Wayzata had 211 yards of total offense the first half to Minnetonka's 32 yards.

In the second half, the Skippers had much better field position as Trojan QB John Ries fumbled the exchange under center and gave it to Minnetonka on the Wayzata 30 yard line.

During the next drive, the Wayzata defenders did their best to not give up the easy touchdown on a short field to Tom Ahrens and the Tonka offense. Defensive back Robbie Heflin made an outstanding play as he knocked down a long ball to keep Minnetonka from airing it out. This was the 2nd sustained drive the Skippers put together in the 2nd half--and it stalled on a 4th and goal with 2 yards to go as a host of Trojan defenders kept the Skipper running back out of the end zone.

Wayzata took over on their own 1 yard line with their backs against the end zone. During the series of downs, quarterback John Ries fumbled the ball into the end zone and Minnetonka defender Connor Roach fell onto it to score the only Skipper touchdown.

Wayzata did nothing with the next possession as the 3rd quarter ended. The Trojans started the 4th quarter by punting out of their own end zone to the 45 yard line. Tack on a Wayzata personal foul, and the Skippers had the ball again at the Trojan 30 yard line.

On a 4th down and 9, Tonka quarterback Tom Ahrens dropped back to pass and threw it to a Skipper receiver; Wayzata DB Jack Egan batted the ball up in the air to himself and did a superman dive with his arms outstretched to intercept the ball to stop a threatening Minnetonka drive.

The Trojans took over, and Ries again went to the air this time to Cecil Doe for a 60 yard pass completion to bring Wayzata into the red zone for the first time in the second half. David Stranghoener added a field goal to make the score 17-7 Wayzata.

The Skippers again did nothing with the ball when starting at their own 24 yard line. Because their was about 5 minutes left in the game, they went for it and turned it over on downs.

Wayzata played far from perfect, but their offensive and defensive lines were dominant enough to overcome the numerous fumbles, false starts, and personal fouls the Trojans committed. It is the 4th consecutive win Wayzata has recorded against their arch rivals. This article will be revised one more time as soon as the stats are available. Stay tuned to Wayzata.com, your Bay Bell Trophy leader. 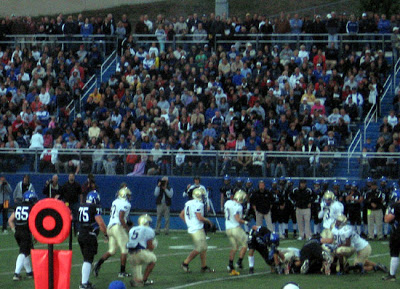 A host of Trojans stops a Minnetonka running back tonight.