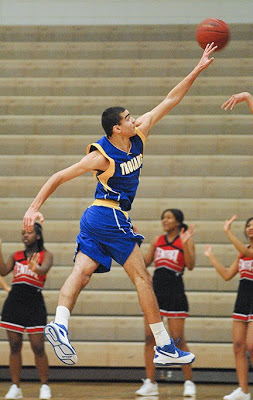 The Wayzata boys basketball team shot 60 percent from the field and senior forward Kellen Taylor played a near flawless game as the Trojans improved to 11-2 on the season with a 71-59 victory over the St. Paul Central Minutemen.

Taylor, who will play for Division II powerhouse Winona State University next year, scored a game-high 22 points on 6-7 from the field and 9-10 from the free throw line.

“One of the great things about Kellen is that he’s really playing within himself and letting things come to him,” Trojans head coach Mike Anderson said. “The nice thing about the way he is scoring is that it’s within the flow of what we’re doing and he hit some big shots tonight when they were trying to crawl back into it.”

The Trojans jumped out to a 16-5 lead in the first half, not on the shoulders of Taylor, but instead thanks to eight early points from senior DeShawn Thurman. Thurman made a rare start against the Minutemen and made the most of his opportunity by finishing the game with 13 points on 6-7 from the field.

“DeShawn is a guy that competes every night and that’s one thing you can count on from him,” Anderson said. “He’s really given us a good shot in the arm energy wise and tonight was no different.”

The Trojans had three starters – Taylor, senior Jerrod Peterson, and senior Eren Cur – pick up three first half fouls. Anderson turned to junior guard Chris Kroeten and sophomore guard Aaron Roth to play some crucial minutes in the first half and both were productive.

Both Kroeten and Roth hit three-pointers in the first half and Kroeten added a steal and breakaway lay-up.

“We had some guys who are trying to get in the line-up who haven’t played a lot and I thought they really did some good things,” Anderson said. “I thought the effort was pretty good tonight.”

After taking a 32-23 lead into the locker room at halftime, Taylor and senior Nolan Odland took over early in the second half to more or less put the game away.

Odland – the leading scorer for the Trojans on the season at more than 17 points per game – scored the Trojans’ first six points of the second half. With the Trojans leading 41-29, Taylor scored the team’s next 13 points including three from long range. When Taylor’s shooting display was over, the Trojans led comfortably at 56-38 with just under eight minutes remaining.

The Minutemen cut the lead the 12 with just under four minutes remaining, but a personal foul and technical foul were whistled on Minutemen senior Jordan Larson. That sent Cur to the line for four three-throws where he converted all four to push the lead back out to 16.

While the offense was clicking for the Trojans, they also looked fairly solid on the defensive end. The Minutemen shot just 34 percent from the field (21-61) and their leading scorer, Taylor Smaller, was held to just nine points on 3-14 shooting.

The 12-point victory should help to erase the memory of the Trojans 81-59 loss to Osseo six days ago.

“In the loss to Osseo I think we learned that we have to be mentally prepared every night and you have to give Osseo some credit,” Anderson said. “They’re a great program, they’re very well coached, and they’re not going to let you off the hook. I think a few of our guys weren’t ready for that game mentally.”

The Trojans will now have to mentally prepare for three games in six days including their Classic Lake Conference opener. The Trojans play again tomorrow night against Milwaukee Lutheran High School at St. Paul Johnson as part of the third annual East Metro Showcase. The Trojans will then host Eagan on Tuesday, Jan. 27 before opening up conference play at defending state champion Minnetonka on Friday, Jan. 30.

The Trojans will get their first crack at number one ranked Hopkins and their four Division I signees on Feb. 10 at Hopkins.

“Hopefully when we get to the Hopkins game we can figure out what we can do against them and then we have to find some ways to defend them,” Anderson said. “They’re awfully big and its going to be a tough match-up.”