Your 2010 Wayzata Trojans Volleball team finished the season 2nd in the State after losing in straight sets to Lakeville North on Saturday. 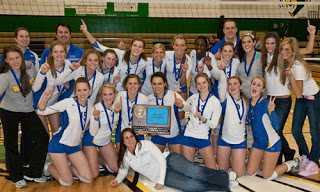 The MSHSL summed up the game like this:
"Lakeville North, which was the No. 1 seed in the Class AAA tournament, lived up to the hype as the Panthers defeated No. 2-seeded Wayzata 3-0 (25-13, 25-18, 25-13). This was the fourth appearance for the Panthers and their first championship.

Taylr McNeil had 27 kills for Lakeville North and Alyssa Goehner added another 11. Jessica Wolff had a team-high nine digs for the Panthers. Julia Doyle had nine kills for Wayzata and Bri Adams had nine digs."

The Star Tribune focused more on Lakevilles win than Wayzata's loss, but here is an excerpt from them over the weekend:

"In eight years as coach Milan Mader's right-hand man in Lakeville, Doug Bergman has seen occasional fire and brimstone out of the 36-year coaching veteran.

But never the sentiment expressed by Mader on Saturday after Lakeville North swept Wayzata in the Class 3A state volleyball championship match.

'Not even close,' Bergman said.

After an attack error by Trojans senior Coral Evans sealed the match -- and Mader's first championship after five previous tries -- he buried his face in his hands amid an arm load of hugs."