Trolley runs out of gas 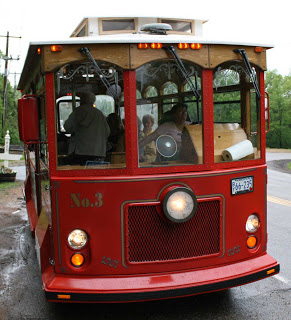 One of Wayzata's icons will not be back on the street next year, according to Greater Wayzata Area Chamber of Commerce Board Chair Suzanne Grandchamp. The Wayzata Towne Trolley has come to an end for this season and effective November 8th the Chamber Board of Directors voted to suspend operations for the 2012 season. The trolley, owned by the Greater Wayzata Community Foundation and operated by the Chamber, and its predecessor has served Wayzata since 1989.

Board Chair Suzanne Grandchamp stated that "it was a difficult decision for our Board of Directors as the trolley has been a popular means of transportation and entertainment". Over the past three years, there have been a number of initiatives and volunteer efforts to try to sustain the trolley for the long term, according to Jeff Lambert, president of the Wayzata Community Foundation and Task Force Chair.

"We spent the past year reviewing options and ultimately recommended the suspension as the only viable option with the existing trolley."

According to Grandchamp, the economic downturn in 2008 had a direct impact on revenues to support the operation. Advertising revenue, the primary source of income, declined 33% in 3 years while private rentals declined over 50%. Also, riders were putting less money in the donation box. In addition to the loss of revenue, the cost of maintenance continues to increase and parts are getting more difficult to obtain due to the age of the 1995 vehicle. Replacement with a newer model could cost up to $100,000. "In this economy, it is difficult to raise that kind of money" said Grandchamp "and we cannot afford to lose money on the operation. Without the generosity of the Wayzata Lions Club, the bottom line results would have been even worse."

The Chamber Board of Directors voted to suspend operations in 2012 and for the foundation to sell the trolley. The proceeds from the sale will be held by the Wayzata Community Foundationfor up to three years. "If there is sufficient interest and the economy improves enough to support a new trolley, the funds would become available as seed money for a new vehicle," reports Lambert.

"It seems that we have all had to make adjustments in this challenging economy. We hope that people will understand our decision. It was not an easy one for us" said Grandchamp.