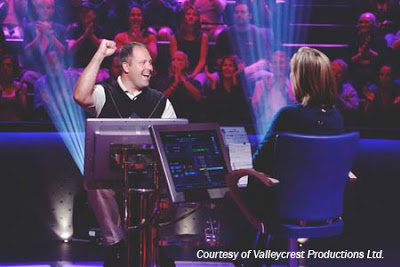 Brad Olson, Social Studies teacher at WHS, won $25,000 on “Who Wants to be a Millionaire”. His show aired on Thursday November 6th but he was only able to answer three questions before the buzzer and his show was finished on Friday.

To win the $25,000 Olson used his “Phone A Friend” lifeline to call his brother-in-law Ray who wasn’t able to give him a definite answer and so he used his “Double Dip” lifeline to win the question.

Olson used his “Ask the Expert” lifeline on his $16,000 question. The expert for that week was Ken Jennings, game show legend from Jeopardy.

He said that if he won big on “Millionaire,”he would pay for Ella’s medical bills and purchase a home.

His daughter Ella was diagnosed with a rare genetic disorder when she was just an infant and has hadto have many surgeries. To compensate for the medical bills Olson and his wife, Mary-Kay, had to sell their house and are currently living at a friends house,who is away for a year.

It was the $50,000 question that landed Olson his still big winnings of $25,000. The question was ““Diaphoresis” is a fancy medical term for what common condition, which might be triggered by a difficult trivia question? A: Nail biting, B: Light headedness, C: Teeth grinding, D: Excessive sweating.” Olson’s final was B. but unfortunately the answer was D. Excessive Sweating.