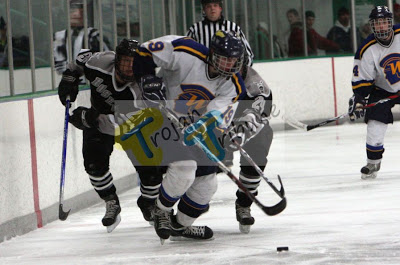 Last season was one that Boys Hockey would rather forget; the team managed only seven regular season wins and was eliminated in the opening round of the postseason. It certainly will not be an easy season for them this year but they are definitely improving.

The Trojans have a new assistant coach, Pat O’Leary, who according to defense man David Russ (12), has made a very positive impact on the team. “Pat’s been great to have this season, he is very knowledgeable and works with a lot of guys during the off season,” said Russ.

Underclassmen have made their impact on a senior laden squad in the forms of sophomores D.J.. Jones, Tony Cameranesi, and Bryan Tabery. Jones can routinely be found in the starting lineup at defense and has been called a “Prodigy” by teammate Lucas Whelan (11). Jones is the leading the defensemen in points (goals/assists). Cameranesi offsets his small size with dazzling speed, and moves the puck very well. Tabery has come up from the JV squad to make strong contributions as a defensive-minded center.

The team has developed strong chemistry, nurtured through years of playing together. “Most of us have been playing together since Mites, we’re comfortable on the ice with each other,” said Russ. The Trojans hope that their chemistry will keep the team strong in pursuit of a winning season.

“We really want to be a contender in out conference,” said Seth Barnes (11), who leads the team in points. The boys are currently 3-3-1, and have won their last two games, most recently a 2-1 nail-biter against Roseville in which Barnes tipped in a shot from Scott Holm(11) to tally the leader with three minutes remaining.

The Trojans will go for their third straight win tonight, on the road, against Osseo at 7:30.