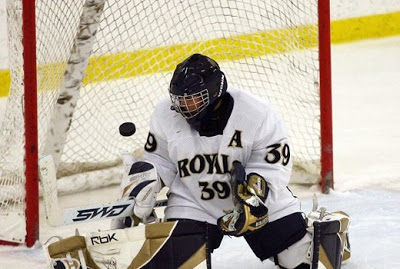 In addition to receiving All-American honors, Spurrier finished her Royal career as the school's only four-time All-MIAC first team award winner. The senior goaltender concluded the regular season with a .941 save percentage while only allowing 1.68 goals per game. With her name already firmly etched in Bethel's record book in several categories, including wins, games played, and saves, her three shutouts this season now give her 14 in her career at Bethel. Spurrier was twice named Women’s Hockey MIAC Athlete of the Week this season for her strong play against nationally ranked opponents, including a shut out of #6 St. Thomas, and the team's first ever point against #1 Gustavus.

The RBK HOCKEY All-American Ice Hockey teams are sponsored by RBK HOCKEY, an international leader in hockey equipment, and chosen by members of the American Hockey Coaches Association (AHCA). Due to the number of teams regionally, the coaches have established two East teams and one West team. All six players from the West region are natives of Minnesota.