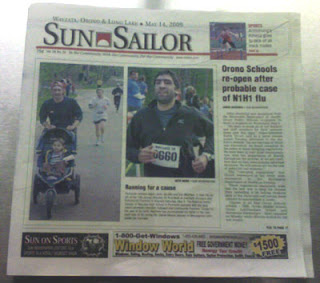 The parent company of the Sun Sailor, American Community Newspapers, voluntarily filed for Chapter 11 bankruptcy April 28, 2009 and will auction their assets this month to reduce debt and allow them to continue to serve communities in Minneapolis, Dallas, Columbus and Washington D.C. suburbs.

According to the Star Tribune, the lenders are expected to be the lead bidders at the auction and have agreed to buy the company for $32 million, but are owed $107 million by the company.

The Star Tribune also reported the company's Chapter 11 bankruptcy filings list debts up to $500 million, and assets of less than $100 million.

To assist in financing the reorganization process, creditors will lend the company up to $5 million dollars.

According to a press release from American Community Newspapers, the company intends to operate business as usual during the reorganization process.

"A difficult economic environment and weak advertising market have created a number of challenges for our industry and our company," CEO Gene Carr said in a company press release.

Stephen Colbert also addressed the struggling newspaper industry last month after mentioning the company filed for bankruptcy, as reported by Chicago Tribune blogger Phil Rosenthal. "The newspaper industry is hurting," Colbert said. "I should explain that term to my young viewers. A 'newspaper' is like a blog that leaves ink on your hands and covers topics other than how much you love Fall Out Boy." See what Colbert had to say on his Web site.