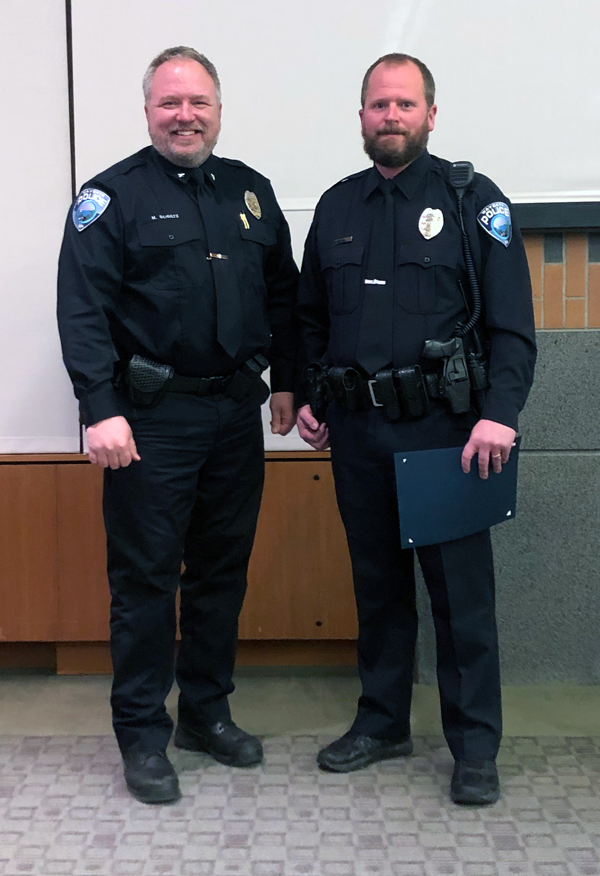 Wayzata police officer Dave Wilson’s quick thinking saved a life back in August 2020 and on Jan. 4 he was recognized for his heroic efforts in front of the city council.

Early in the morning on Aug. 27, 2020, Wilson was called to the scene of an unconscious man who was electrocuted at a work site on Waycliffe Drive N. The unconscious man was surrounded by coworkers who were there for a landscaping job trying to provide him aid when Wilson arrived.

As the first on the scene, he checked the man for a heartbeat. There was none, and he was not breathing. Wilson immediately began performing life-saving measures such as CPR and chest compressions before using his defibrillator and shocking his heart back to work.

Paramedics were able to transport the man to the hospital where he regained consciousness and after a short recovery was able to go home.

“Without his quick response and vital, life-saving measures that Officer Wilson provided, the young man may not have survived this incident,” Chief Marc Schultz said. “Officer Dave Wilson is to be recognized for his swift response and exemplary actions in an obvious life or death situation.”

With that, Schultz presented Wilson with the Wayzata Police Department Life Saving Award and Medal. Wilson was in attendance with members of his family but declined to take the podium for comment.

“This is not the first time Officer Wilson has received an award similar to this,” said city manager Jeff Dahl. “This is a really good picture of who he is as a servant of the community.”

Mayor Johanna Mouton and councilor Cathy Iverson echoed the words of Schultz and Dahl in speaking about Wilson.

“Your actions were exemplary in saving a man’s life — a man who came to work in this community and was able to go home because of your thoughtfulness, your swift response and your training,” Mouton said. “As someone who has been your neighbor and now your colleague, I am very proud to say that we have people who always rise to the call to protect and serve every single day.”

Posted in Wayzata City Council, Wayzata Police Department
no comments yet
Please enable Javascript to comment on this blog