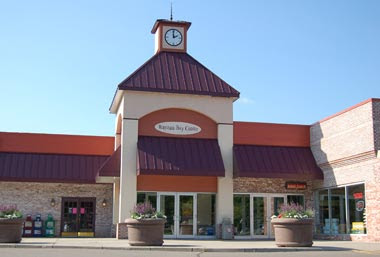 The City of Wayzata is preparing for the possibility that the Wayzata Bay Center could be razed all at once instead of in phases. Council Members met last Tuesday at 7:30 am for an impromptu City Council meeting. Mayor Willcox today responded to questions about the acceleration of the demolition:

"What spurred last Tuesday's workshop was that we had been given some updated information on the Bay Center construction schedule. Not surprisingly, original assumptions have had to be adjusted as credit markets and retail conditions deteriorated." Willcox said.

Reports that the plans to raze the whole project at once are possible, but not definite at this time. Willocox addressed the revelation, "Whether the center will come down all at once depends on a number of factors including how many tenants are left and for how long. If all of the leases are settled, the developer could raze the center all at once rather than phase it out. If they are unable to reach satisfactory agreements, it could stretch out longer. We don't know."

The Mayor continued with regards to the pressing issue of relocating the Muni, "Whatever happens, though, it was clear that we need to reach some resolution on our next steps if we want to avoid a break in service and revenue... In either case we expect the muni to come down by year end."

So there you have it, straight from the Mayor himself. Indications that the whole center will be razed at one time are possible, but not definite. The possibility of the scenario does accelerate the need to resolve the Muni location, as was evidenced by the mailing the City sent out to property owners and residents this week. The release indicates that a relocation meeting will be held right after the City Council Meeting on January 20th, 2009.