A trip to Chicago five years ago gave John Lura a business idea.

The 19 year old finally made that idea into a reality on May 17 when he took his first ride for Lakefront Pedicabs.

“I went to Chicago with my family and we rented a pedicab there. I just kind of had an idea that it would be pretty cool if we had one of those in Wayzata,” Lura said. 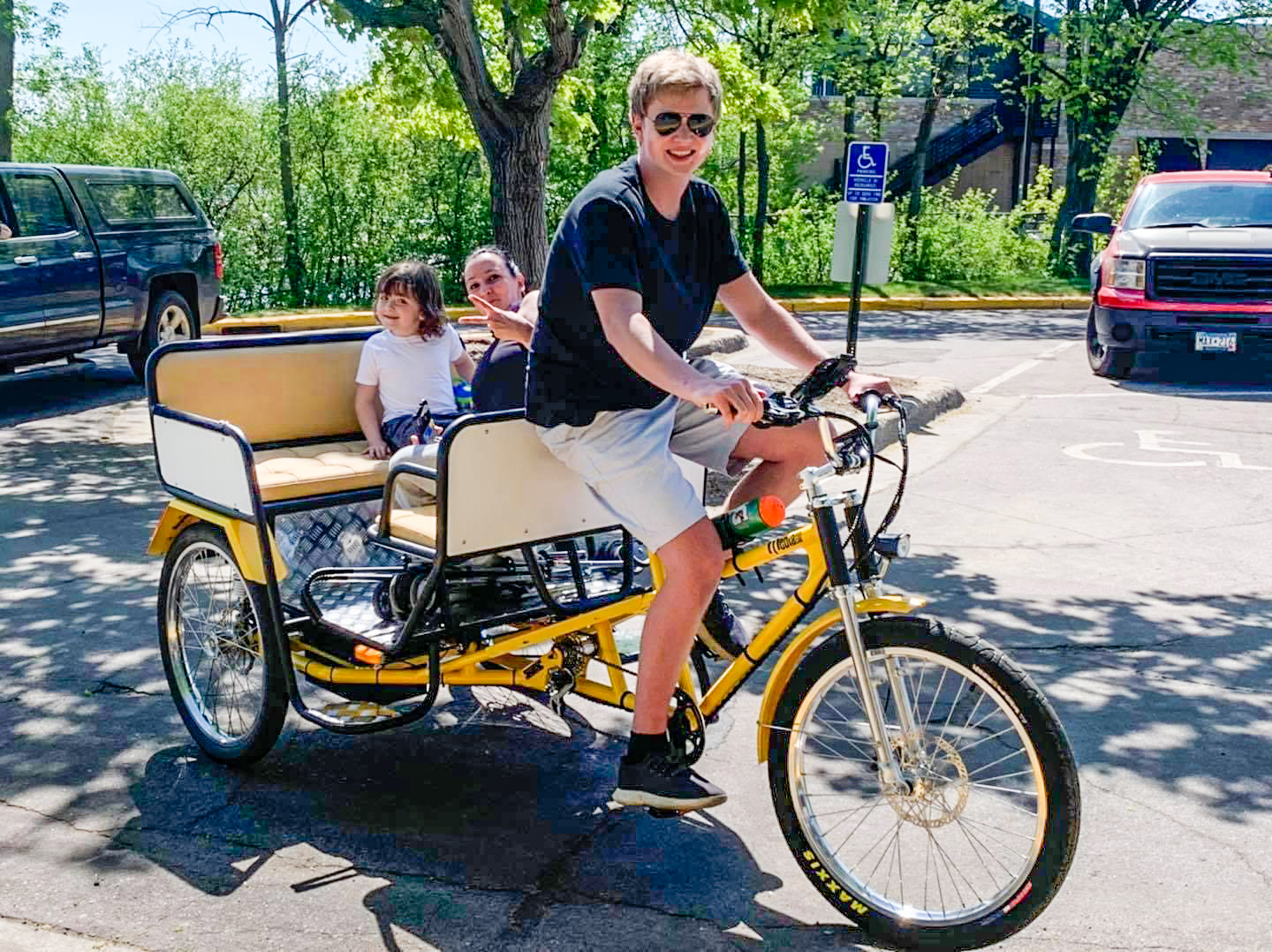 Lura wanted to get the wheels turning two years ago but he learned he needed to be 18 years old to do it. Then the COVID-19 kept him from getting started last year.

Knowing 2021 looked more promising, Lura contacted the city and pitched the idea of a pedicab service. After presenting the idea to the city and establishing the proper city code it was time to find a pedicab.

Lura found the pedicab he wanted from a manufacturer in Arizona. Shipping the pedicab would have been expensive and unreliable because of the pandemic, according to Lura.

The only other option was to hit the road himself. Lura caught a flight to Arizona and brought his pedicab home in a moving truck.

Now he’s ready to help Wayzata residents and visitors experience a cruise around the lake from a new perspective.

Lakefront Pedicabs will give rides to up to five people at a time on Lake Street between the Hotel Landing and Wayzata Beach. The pedicab can seat five but Lura says four people is the ideal capacity.

You’re likely to see Lura and his pedicab through the summer from noon to 8 p.m. unless it is raining. He plans to adjust his hours with experience.

“I see the real season to start, beginning in June. That will be the peak and that will go until the end of August,” he said. “So I’ll basically work every single day it’s nice outside. That will change a little as I figure out what the best times are.”

Lakefront Pedicabs recently joined the Chamber of Commerce. The next step for the business is raising awareness. Lura is working on adding advertisements to the pedicab and getting the word out about what he’s doing. He wants to feature advertisements on his pedicab for local businesses.

Pedicabs became increasingly popular on the West Coast in the 1980s before being adopted in cities across the United States. They are especially popular for tourists, giving them a leisurely way to traverse a new place and take in the sights before arriving at their destination. On top of that, rides are often cheaper than a taxi or even a rideshare service.

Lakefront Pedicabs offers rides for a flat rate of $5 per person.

Lura doesn’t think his business will be limited to tourists.

“The first day, it was a lot of moms with their kids who wanted to go,” he said. “Some people just like going for a ride. Some people are going from their boat to the restaurants. I kind of see a market with almost every type of group.”

The response in the first few days Lura’s been operating has been overwhelmingly positive. Meanwhile, he’s having a good time pedaling away on the pedicab.

“It’s been really fun. Everyone who’s ridden it said they’ve loved it and they’d love to do it again,” Lura said.

Posted in Lake Street, Lakefront Pedicabs, Wayzata Chamber
no comments yet
Please enable Javascript to comment on this blog