John Millea of the Star Tribune has a huge write-up: Open mic night is revealing 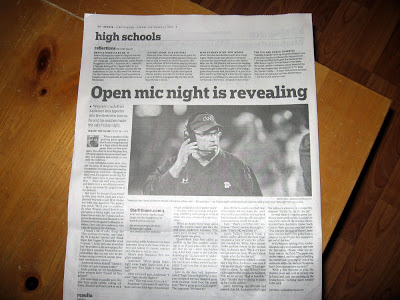 Talk about a huge feature in the Strib today! John Millea attended the Wayzata Football game against Apple Valley in Plymouth on Friday night, September 19th, 2008. He spent the evening in the press box with Wayzata's coaching staff with a pair of headphones on that were piped directly into Coach Brad Anderson's communications system, and could hear every word.

The coverage of Wayzata versus Apple Valley has been huge this weekend, and this is probably the best of the bunch in terms of giving you an inside look at the Wayzata Football program. It's great exposure for Wayzata Football, Wayzata Public Schools, and the Wayzata community. Millea breaks down a couple of plays, describes Anderson's communication with his staff, and talks about Cecil Doe's circus catch from Anderson's point of view. He also talks about the emotion, frustration and celebration that he claims "that no one else in the homecoming crowd of several thousand was remotely aware of." That might be a bit over the top, but we'll give John the benefit of the doubt.
Check out the complete story here.
Wayzata.com is your Wayzata feature in the sports section leader. You can also see this story along with many others in the Wayzata versus Apple Valley media report.
Posted in Uncategorized
no comments yet
Please enable Javascript to comment on this blog