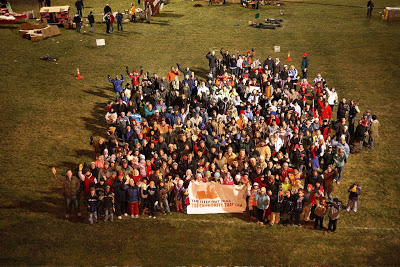 Interfaith Outreach & Community Partners (IOCP) is launching its 13th annual Sleep Out Campaign to raise awareness of the need and funds for affordable housing in the communities it serves. Given the financial crisis and rising rate of foreclosures in the suburbs, families IOCP serves are facing housing challenges unlike ever before.

“To fully meet the basic housing needs of the people we serve, we need to raise $2 million,” said LaDonna Hoy, IOCP executive director. “Our real goal is to be able to respond to the requests of more than 900 families in the coming year.”

Funds raised during the Sleep Out represent IOCP’s entire housing budget for the year and 42 percent of the organization’s total annual budget. Sleep Out funds are used to address the emergency housing needs of low-income families and individuals, and to pursue affordable housing developments. More than half—58 percent—of the families IOCP provides housing services for need help one to two months in order to stabilize their situation.

“Our theme for this year’s Sleep Out, ‘The Community That Can,’ reflects the capacity of this community to respond,” added Hoy. “This community has the means, the heart, and the will to rise to the challenge, as it does every year.” The campaign runs from Nov. 15 to Dec. 23, 2008.

In 1996, Wayzata shoe repairman Bob Fisher slept outside in a tent to raise money to buy Thanksgiving dinners for 100 families in the community. In two weeks, Fisher raised $10,000. In subsequent discussions between Fisher and IOCP, he became aware that the most pressing need facing IOCP clients was housing. So he resolved to sleep out each year, dedicating the funds he raised to help meet the housing needs of families in IOCP’s service area.

During the subsequent years, the campaign attracted increasingly broad involvement. During the 12-year history of the Sleep Out, about 3,200 community members—including businesses, churches, youth and civic groups—have raised more than $9 million to support IOCP’s emergency housing services and long-term housing solutions.

The mission of IOCP is to identify and respond to the basic unmet needs of people in our community, and to assist them in moving toward self-sufficiency through the creative action of an inclusive partnership of communities of faith, schools, government, businesses, community groups, foundations, health systems, and individuals.