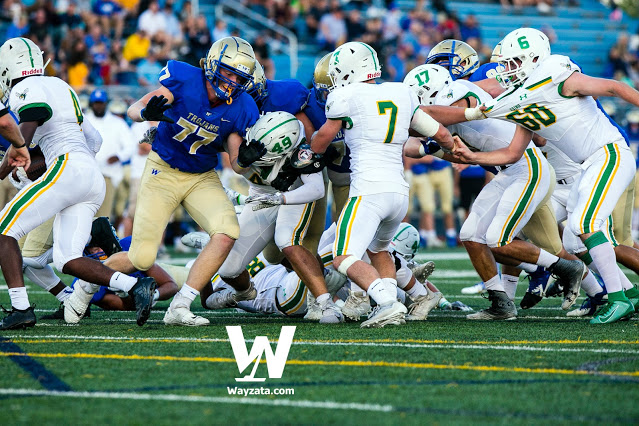 Wayzata’s Tyler Magnusun has committed to Syracuse & will help lead the Trojans O-Line this year.
In an about face, the Minnesota State High School League’s Board of Directors is allowing football and volleyball teams to compete this fall.

The reversal comes after a vote on Aug. 4, when the board approved postponing football and volleyball until a spring season due to the COVID-19 pandemic.

Teams will play a six-game regular season beginning the week of Oct. 5.

“The High School League made a decision to re-evaluate and look at everything going and decided we are going to play and we are excited about that,” said Wayzata Football Head Coach Lambert Brown via Zoom video now available on Wayzata.com.

“(The) decision, based on what we currently know and with the unknowns of what spring will bring, is based on the belief that playing now provides us the best opportunity to play a football and volleyball season,” said Board of Directors President Blaine Novak.

One element that will be missing from volleyball matches this season is the fans in the stands. This is one of the tradeoffs to prevent the spread of COVID-19.

“Our parents have been really supportive of their daughters and their coaches,” said Jackson. “They, of course, wish to be allowed to be in-person spectators of our matches, but they realize and accept that isn’t a possibility currently. All teams will have to create their own energy without fans present.”

2019 was a magical year for both the Wayzata Trojan football and volleyball teams.

The football team under the direction of Head Coach Lambert Brown marched through the season capping it off with a win over Champlin Parkin the state championship.

Meanwhile, the volleyball team had an equally stellar season. That squad won its first state championship by defeating Eagan.

Can these teams repeat? We’ll know sooner than later.