Foxglove Farm house to be sold, moved to new location 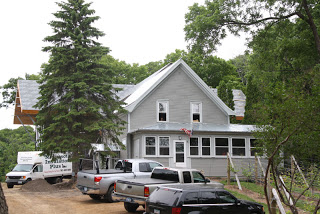 Foxglove Farm, located on top of a hill on LaSalle Street, is a farm with a history dating back to the 1920s and is looking for a new home.

The current owner of the farm, Billy Smith, has lived on the property for about seven years and has decided to build a modern day farmhouse on the property to tend to his vineyard.

The impeccable condition of the almost 80-year-old home has caused a stir among historical conservatives who wish to keep the house intact. As a solution, Smith has decided to sell the old house, and have it moved to a new location.

"One way or another, it will be salvaged," Smith said. "Ultimately it would be nice to save the whole thing."

Smith is looking to sell the home to someone interested in keeping it's historical integrity. It is possible to move the home in one piece, aside from the porch.

The farm was purchased around 1920 by English pharmaceutical chemist Frederick Upsher-Smith as a summertime home for his family. Foxglove flowers were grown at the farm and processed into digitalis, a drug used to treat congestive heart failure. Over time, Upsher-Smith became a sizable company, and is now based in Maple Grove. It makes products for women's health, dermatology and cardiology, according to its Web site. It is also actively pursuing therapy for epilepsy and Parkinson's Disease.