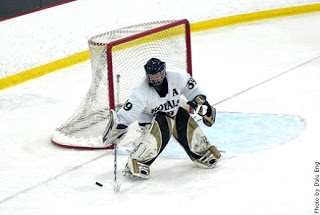 Bethel University goaltender Beth Spurrier, a Wayzata High School graduate, has been named the Minnesota Intercollegiate Athletic Conference (MIAC) Women's Hockey Athlete of the Week for her performances during the week of February 16, 2009.

Spurrier led Bethel to a 1-0-1 week that saw them earn three out of a possible four points in the conference standings against #6 St. Thomas with a 1-0 win and a 2-2 tie. Prior to this past weekend, #1 Gustavus Adolphus was the only other team in the conference to limit St. Thomas to two goals or less in a two game series this season. The three-time All-MIAC goalie shut out the Tommies on Friday night, halting each of the 38 shots that came her way, making her just the second goalie to shut out St. Thomas this season.

Spurrier now has 14 career shutouts, which is second best among active MIAC goalies. The following afternoon, she kept the Royals in the game by making 43 saves, giving the team an opportunity to tie, and stopped two shots in the overtime period to preserve the tie. Bethel's win and tie gives the program its best overall and conference record in its 10-year history. Spurrier finishes the regular season in the top third of MIAC goalies for goals against average, save percentage, and winning percentage.