The council approved the consulting services agreement by a vote of 4-0. Council member Jeff Buchanan was absent.

You can review the agreement beginning on page 111 of the city council agenda.

The Section Foreman House is an historic structure that once housed railroad employees and their families beginning in the early 1900s.

The Wayzata house is believed to be the last building of its kind remaining on its original site.
The City states that while the agreement is paid by the City of Wayzata, the Wayzata Conservancy has agreed to reimburse for the consulting services in full.
The agreement will allow New History to create and submit a National Register of Historic Places Nomination for the Section Foreman House. 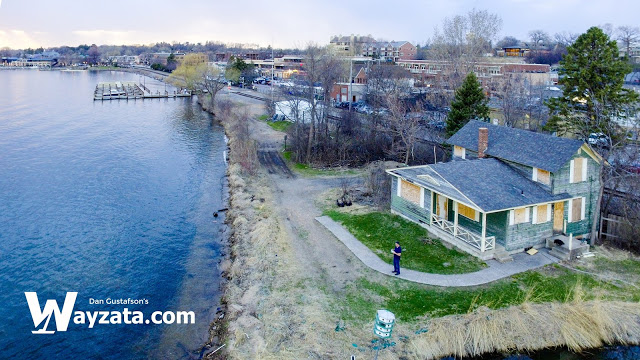 The house will have more recognition and additional opportunities for grant funding for future renovations if the National Register nomination is approved.
In addition to the nomination, New History may help the Wayzata Conservancy with donor cultivation.
“The Conservancy at the City of Wayzata's direction is excited to leverage the experience of the team at New History to fully explore and hopefully achieve a listing on the National Register of Historic Places (NRHP) in addition to exploring public and private funding sources to help preserve this important piece of Wayzata's history,” said Conservancy Board Chair Andrew Mullin.
The submission of the National Register of Historic Places Nomination is expected to cost between $8,000 and $12,000 according to New History’s proposal. Donor cultivation for the Wayzata Conservancy would be approximately $2,500 to $5,000.
New History was hired by the City of Wayzata in 2019 for an exterior stabilization phase of the Section Foreman House. This included a conditions assessment update, construction documents for stabilization, a design framework for reuse and a plan for reuse.
The restoration and reuse of the Section Foreman House is a part of the Panoway (formerly Lake Effect) Phase 2.
Phase 1, which includes current construction on Lake Street, is already underway.
The City of Wayzata is seeking $10 million in bonding from the State of Minnesota to fund the second phase of Panoway. That phase will include: Restoring the Section Foreman House to create a community room and interactive learning center for history and the environment, creating a new Eco Park and shoreland restoration, lakeside boardwalk and community docks, Wayzata Depot park area enhancement.
RELATED CONTENT: $10M For Wayzata Lake Effect Doesn't Make Special Session Cut
The restoration of the Section Foreman House and creation of the Eco Park will cost approximately $2 million.
Wayzata Section Foreman House History
The Section Foreman House was built in 1902. 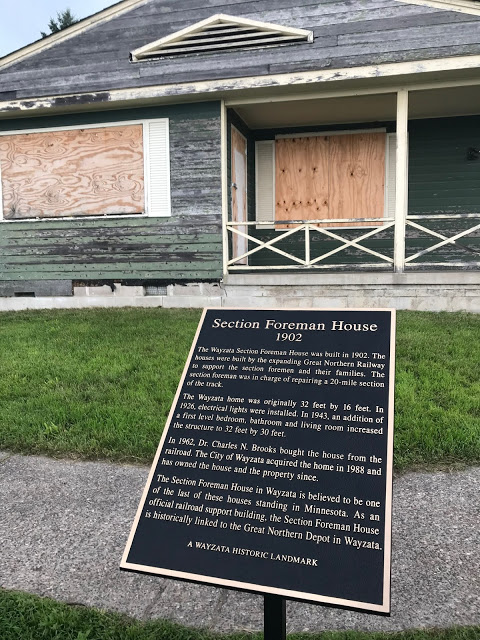 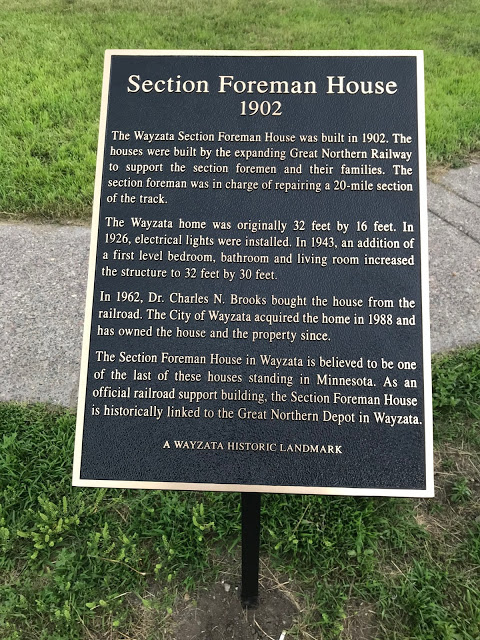 Section foreman houses were popping up all along the expanding Great Northern Railroad to support the section foreman and their families. You could expect to see one every 20 miles or so. The section foreman oversaw keeping the rail in good repair.
These were simple homes. The Wayzata house is no exception. The home was originally 32 feet by 16 feet. It had two rooms each on the first and second levels. It cost $750 to build.
Through the years, the Section Foreman House underwent several changes, but the integrity of the original home was never diminished. In 1926, electrical lights were installed. A 100-foot pipeline was installed between the home and the city water main in 1938.
In 1943, the home was lifted to install a concrete foundation and basement. It was at this time that the home expanded; a first-level bedroom and living room increased the structure to 32 feet by 30 feet. A year later, toilet facilities and sewer lines were installed.
Dr. Charles N. Brooks bought the house from the railroad in the early 1960s. The following year, Brooks built a new entrance on the south end complete with a front porch and an expanded living room. The City of Wayzata acquired the home several decades later and has owned the house and the property since.

In February of 2011, the city council appointed a Lakefront Task Force to research and provide a recommendation for the future of the City’s lakefront.

The city council adopted the Report of the Wayzata Lakefront Taskforce in January of 2012.

In March of 2014, the city council adopted the Wayzata Lakefront Final Framework Report.

Wayzata selected Civitas as the design team for the Lake Effect Signature Park schematic design in September of 2015.

On December 15, 2016, the city council approved an agreement with the Lake Effect Conservancy as a part of Resolution 29-2016 which defined the scope of the Lake Effect Project and its next steps.

That agreement states that the Conservancy will actively raise Private and Philanthropic Funding.