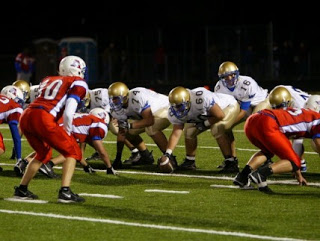 Wayzata Football Head Coach Brad Anderson was kind enough to join me for our regular segments: The Final Word on Minnetonka and a Preview of the upcoming game Wayzata vs the Armstrong Falcons.

Dan Gustafson : First off, congratulations on your win over Minnetonka, Coach.

Brad Anderson: Thank you very much, it was a quality win for us.

DG: Absolutely. Talk about what that victory meant to your team.

BA: The biggest thing is, well, there are two things to it. One, we talked at the beginning of the year about winning the [Classic Lake] Conference championship, and if you lose that game it is really tough, so that's one factor. And so the other factor is, I just think, from a confidence standpoint, when you beat good teams, you grow, because you realize you can do better than maybe people thought. Both those factors.

DG: It was a great win. Talk about Cecil Doe's game, he seemed to...

BA: I thought he had a great game, obviously, two huge huge plays. The first one of the touchdown on the 4th down is one of those where you are going to take a shot and everything has got to go just right. He made a nice catch and obviously set the tone for the game. One on one out there, he is tough to cover. The other one, [Minnetonka] gained momentum through their play and some of ours and I thought at that point we needed to get the momentum back on our side. We gave him a shot to make a play and he came up huge for us.

DG: Is that what impacted your play call there?

BA: Both those plays were huge momentum plays, the first one to establish, you know, here we had a nice drive but if you don't score, you maybe forget about it. The second one was, we had been pinned back there, our defense had played well, but you can only do that for so long. The change in field position was huge.

DG: You won the field position battle in the first half, no question about it.

BA: Yeah, I thought we executed offensively, our defense did a great job of getting us the ball back and not allowing them to gain field position and that is so important in a game. You have a lot more plays at your disposal from 50 rather than your own 5 yard line.

DG: What did you think overall of the defense?

BA: Our thought our defense played very well. We are not a huge defensive team, we have to do it with effort, and technique. Our players just played really big that night. I thought we swarmed to the ball and were able to take away their size advantage, that was something we worried about going into it.

DG: How did you think John Ries did?

BA: John made some great great throws. The first one to Cecil, a lot of guys will see a guy open, but to hit him right in stride like he did, that was huge. Again, late in the game, to put the ball where he could make the catch and nobody else could, he did a great job. I also thought Matt Tarply, when he came in for his series in the first half, hit Cecil on a post route, threw just a laser. He showed if we needed to go with him, he could be a very quality starter as well. So I felt very good at the game with both of our quarterbacks.

DG: What did you think of Robbie Heflin's interception?

BA: We see it all the time in practice, so it didn't surprise me. He's, I'd say, our best cover guy. The thing about his game is the run support. He's been a good cover guy all fall, and in the last few weeks he has become a great run support player. When you have small guys you have to be able to tackle as well, and he did a good job of that.

DG: Anything that needed improvement as your team executed against Minnetonka?

BA: Well, I don't like putting the ball on the ground twice, in our own end zone or in our own zone. One for a touchdown, for them and the other to give them great field position--our defense played really well. Protecting the ball, there is no shame in punting. I always tell our team, we want a kick after every possession, whether it is an extra point, or a field goal, or a punt. That's our goal. We don't like to turn the ball over, so I thought that that was an area of improvement for us that we are going to focus on.

DG: Did you do anything in practice this week to address it?

BA: I let Tim McNiff worry about the running backs, he addressed that part of it. The quarterbacks, we just talked about ball control and being aware of you have to protect the football. I think being more conscious of being aware of how you have to hold the football and protect the ball into your body and not have it hanging out away from your body. Our centers and quarterbacks worked a little extra time on the quarterback exchange as well.

DG: Speaking of centers, how did your new center do?

BA: Jason Flesher, he played really well for us, if you watch the film or watch the game, he was lined up against Bo Allen most of the night. We let him go one on one with him all night and he was able to get us a stalemate at that position, and that was one that we thought we had to have. He's a little dinged up right now, so we'll see if he will go tomorrow night. We have another one, Carson King, who can step in and we will feel comfortable with him as well. We are very fortunate in that we have two centers that can play at this level.

DG: How are you game planning for Armstrong?

BA: We are game planning them like we would everyone else. We look at what are we doing well, what do we need to work on, areas that we think we can attack them at. They are good athletes, when our seniors were sophomores, we played them as sophomores, they beat us. Our seniors know what a good group of athletes they have over there, and we know we have to play well as a team if we are going to win the game. We really focus on what can we do to improve our game. As well as we played last week, we could do a better job of being a little bit more crisp in our in our execution. So that's what we are working on.

DG: Armstrong returned only five seniors this year, reportedly, what kind of impact does that have on a program?

BA: I think it all starts with your seniors. I think whenever you have a small senior group, or not a lot of seniors who are contributing, it makes it a lot more difficult. Juniors have to be able to contribute, but really, the flavor of your team revolves around your seniors. We know when we have good senior classes we have good teams, and when our senior classes aren't as strong, then we have years where we are going to struggle a bit more. I know this much, we feel more comfortable when we have a good senior class.

DG: Who are some of the big names you are going to have to stop on the Falcons?

BA: We really don't really try to focus on any one player, it is more schemes. We are really looking at schemes more than players, if you start focusing on players, they can move players around. We do that all the time. Offensively, we are going to move a guy from a wide spot to a slot, flex guys out, do different things to try to get the ball to different players. Your schemes pretty much stay the same. So if you prepare with that in mind, it shouldn't matter as much about who it is rather than what they do.

DG: In Armstrong's loss to Rochester, they had a little bit of success throwing to their big tight ends. Are you guys prepared for that?

BA: Like I said, the sophomores gave us a lot of trouble and beat us, so we are well aware of they have players who can hurt you if you don't cover them. The idea is not to leave anyone open. If you leave the tight ends open, he's gonna hurt you. If it's the wide receiver, he's gonna hurt you. So we just have to do a good job and make sure that we are sound. Coach Lombardi does a great job of that every week. He tweaks the scheme, so that it is never quite the same, but it is still the same principles we depend upon--that's getting to the ball, and everyone knowing their assignment. Those are what we really hang our hat on.

DG: Any other thoughts on Armstrong before the game?

BA: They look very athletic on film, and sometimes it takes a couple of weeks to get your feet underneath you. As coaches we are well aware of that and our challenge is to make sure our players understand that just because Armstrong didn't get off on the best start doesn't mean they don't have great players or good schemes, it just means that sometimes it takes a while for things to gel. We are going to try and keep them from having that happen this week.

DG: One other final question away from the football program but still regarding Armstrong. Are they still at risk of losing their athletic programs? Have you heard anything? Any talk on the street?

BA: I think if you look at their district their district is under some financial constraints right now and I know if they don't pass their referendum they are going to have to look at all parts of the district and obviously athletics has been a huge part of that. We would hate to see them have any more troubles. They are good for our conference and it's been a great rivalry over the years but I know that if you don't have the money to run programs it becomes very difficult. We are hopeful for them that they pass the referendum.

DG: What would happen to the Classic Lake if they disappeared?

BA: That decision is made by people who have a lot more letters behind their name than I do. That would have to be an administrator type of decision. I know it gets tough to run a competitive athletic department if you don't have the funds and you can read into that what you may.

DG: Well Coach, thank you again for your time, and congratulations on the win over Minnetonka. We wish you all the best against Armstrong this weekend.

BA: Appreciate that, hopefully we will be talking about a win next week.