The Wayzata boys hockey team lost 6-2 to Edina in the championship game of the CCX Media Turkey Trot tournament. Edina broke a 2-2 tie early in the third period, then added three more goals, all by Matt VanderVort, to skate away with the win. Brittan Alstead and Max McCollins scored for Wayzata.

Posted in Wayzata Boys Hockey, Wayzata Trojans
no comments yet

The Wayzata boys basketball team is getting set for what they hope is another strong season after winning the state class AAAA title last season. The Trojans graduated talented guards Eddie Beeninga and Kody Williams, and senior Camden Heide, who would have been one of the state’s best players this winter, left to play for a prep school in Utah. They do return two very good starters in St. Thomas recruit Carter Bjerke and three-sport standout Drew Berkland, plus key reserve Ryan Harvey. Wayzata will be tested early as they take on highly ranked Park Center, Shakopee and Cretin-Derham Hall in a one-week stretch in mid-December.

Posted in Wayzata Boys Basketball, Wayzata Trojans
no comments yet

Posted in Wayzata Girls Basketball, Wayzata Trojans
no comments yet

Wayzata junior Claire Reinke won the 100 yard butterfly race at the Class “AA” girls swimming and diving meet Saturday helping her team to a fourth place finish. Reinke’s time of 54.36 seconds also makes her a high school All-American in the event. She also won the 100 butterfly in 2019 (there was no state meet in 2020). Wayzata’s 200 yard Medley Relay team of Linnea Kallebo, Nora Rabe, Reinke, and Kimberly Lan placed fourth while the Trojans 200 Yard Freestyle Relay team of Geneva Fackler, Lan, Emily Alberts, and Lucy Troyak also placed fourth in their race. Other top five finishes for local swimmers included Armstrong senior Zoe Bresnahan who placed 2nd in the 500 Free and 4th in the 200 Free. Maple Grove freshman Libby Bakker finished 4th in the 100 Free and 5th in the 200 Yard IM. In Class “A”, Breck finished 7th and Benilde-St. Margaret’s 10th. The Mustangs’ Ava Allingham placed 3rd in the 200 Yard IM and 4th in the 100 Yard Breaststroke while Breck’s Piper Crosby swam to a 2nd place finish in the 100 Yard Backstroke and a 4th place finish in the 200 Free. Also the Mustangs’ relay team of Crosby, Ava Allingham, Stella Allingham, and Abby Colgan finished 3rd in the 200 Yard Medley Relay. Benilde’s Lauren Benedict placed 4th in the 50 Free and 5th in the 100 Butterfly.

Posted in Wayzata Swimming, Wayzata Trojans
no comments yet

Light up the Lake Wayzata 2021 Schedule of Events 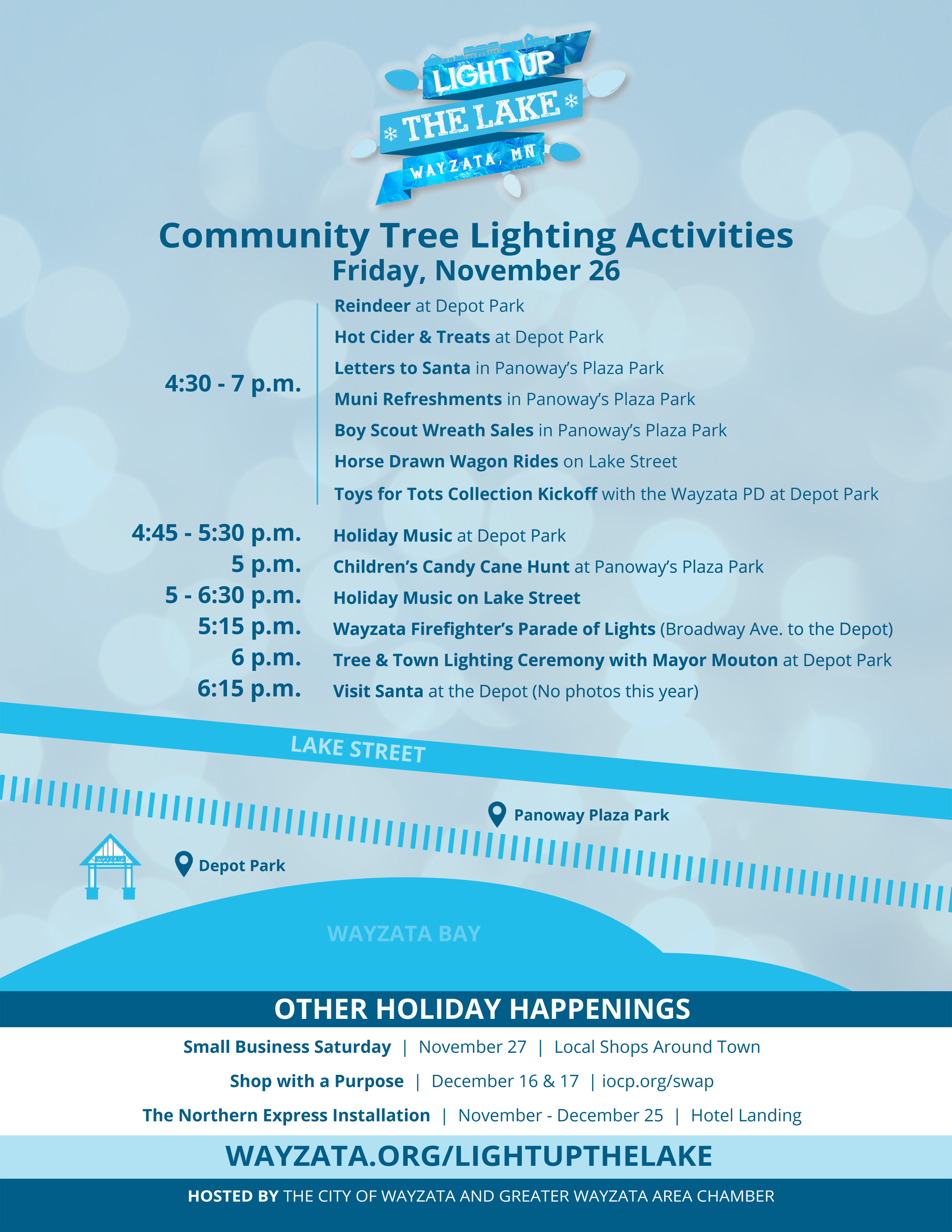 Posted in City of Wayzata, Lake Street, Light up the Lake, Wayzata Chamber
no comments yet

For more than 30 years, lawful gambling has helped the Wayzata Lions Club affect the community in a positive way.

From the volunteer fire department to the Boardwalk Apartments, the club’s touch can be felt in countless ways. Club president Tim Anderson said about $2.4 million has gone back into the greater area thanks to lawful gambling.

During a presentation at a regular city council meeting on Nov. 16, Anderson said the club has contributed more than $1.4 million to the city and more than $339,000 to the surrounding area.

The Wayzata Lions Club has about 20 members currently.

The club was entrusted with handling lawful gambling in 1988 by overseeing the pull-tab gaming at the Wayzata Bar and Grill. The lawful gambling partnership with the city allows the club to give gambling revenues to nonprofit organizations.

Wayzata is a safer community as a result of the operation as around half of the revenue generated is donated to the City of Wayzata's Fire Department through the Wayzata Fire Relief Association.  Over the years this partnership has benefited residents by regularly funding a long list of items the department has needed including cold water rescue suits, uniforms, fans, hose, and truck upgrades.

"We’ve also been able to contribute to Lions international priorities, such as disaster relief and humanitarian efforts,” Anderson said. “We have about eight part-time pull-tab employees who rotate down there at the Muni.”

More locally the Wayzata Lions Club donates annually to the Wayzata senior community via the Boardwalk Apartments to make transportation possible for residents. It also provides annual scholarships to Wayzata High School seniors every year as well and donates to other school programs.

The club also donates to a variety of charities with a focus on helping people with vision and hearing loss, children’s cancer research and support, the Salvation Army and a large number of one-time donations just to name a few; and lawful gambling is a primary funding source for those charitable efforts.

Other local non-profits such as Interfaith Outreach and Community Partners have also received significant contributions over the years approaching over $100,000.

Nancy Nelson McIntosh took over the role of gambling manager for the club earlier this year after her father Bill Nelson passed away. Bill Nelson managed lawful gambling for 32 years since its inception in 1988. In recent years, McIntosh and her sister Marcia Yeung had been helping him with the operation.

“It’s been a very profitable and really clean operation,” McIntosh said. “We’ve been able to give a lot back to the community of Wayzata. One of the biggest beneficiaries is the city itself through the fire department. Aside from that, our list of beneficiaries is really extensive.”

"I’ve met so many people from the Wayzata community and business community there," she said. "It really overall has been a positive in terms of what the Lions are able to give back. The whole social purpose of what we’re doing has been significant."

Longtime Lions Club member and Wayzata Charter Commissioner Kent Howe said many people are unaware just how much the club has affected Wayzata by giving back from lawful gambling.

"It's been an honor to be entrusted with the pull-tab operation and we are very grateful to the community. Our charitable works have been ongoing since 1988 and our partners like the Fire Department and IOCP have benefited greatly through this continuing program," he said.

Howe, Anderson and McIntosh are unsure what the reception of lawful gambling was like in Wayzata in 1988 as none of them were involved with the club at the time. But they agreed the club’s charitable nature has made lawful gambling an overall positive and fruitful addition to Wayzata.

Other programs the Wayzata Lions are involved with annually include collecting eyeglasses and hearing aids, holiday bell ringing for the Salvation Army at Lunds & Byerlys, a Belgian Waffle Breakfast fundraiser at St. Barts, and serving at community events by volunteering at the information and beer tents at James J. Hill Days and responding to Letters for Santa at the Light up the Lake event.

Last summer, the club volunteered to help with traffic control for Tour de Tonka. It has also been a volunteer for the Hennepin County Adopt A Highway program, which sees members doing cleanup on Highway 101 twice a year.

Posted in Wayzata Bar & Grill, Wayzata Lions
no comments yet

The 2021 Wayzata Volleyball team may be the best high school team that has ever played in the State of Minnesota.

The team lost only 7 sets all season. Wayzata also won the 2019 State Championship, and as the 2020 playoffs were cancelled the team has won back to back crowns.

Head Coach Scott Jackson, now in his 23rd season, expressed gratitude to his opponent after the match, “East Ridge was phenomenal tonight, they earned a lot of points against us.”

Jackson was also quick to give praise to his team, “Our whole team was just on point tonight. We had to be against a great team and we gave a great effort.”

Asked about the pressure of facing teams all season long while being undefeated, Outside Hitter Sierra Moore answered, “It just feels really awesome because going into this everyone was at our throats and really wanted to the team that took us off and if feels so good to prove ourselves and show that we are the ones that deserve to have this title and the winning season.” Moore finished with 13 kills, 37 attacks, and 11 digs.

“It’s fun to get challenged,” stated Right Side Katy Riviere. “There’s 17 girls in that gym working and we challenge each other all the time so we are ready to meet an opponent who is ready to challenge us too.” Riviere finished the match with 13 kills, 12 digs, and 3 blocks.

As a now senior Libero Ella Voegele was asked to compare the 2021 Championship to the 2019 Championship, “Going into this, I was a lot more confident because two years ago I was a sophomore and was bit intimidated. We know what we can do and we play for each other and believe in each other... we’ve done it this whole season.”

Jackson also reflected on some other key performers, “Avery Jesewitz had the best match of the season for us, and Stella Swenson was a stud that she always is for us, and we are excited for the future even as we are going to miss these seniors dearly.” Jesewitz finished with 6 kills on 12 total attacks and 2 digs, and Swenson has 29 assists, 2 aces, and 2 digs.

Watch video highlights and the full game online at Wayzata.com/news.

Posted in Wayzata Trojans, Wayzata Volleyball
no comments yet

IOCP Sleep Out goal is $3 million 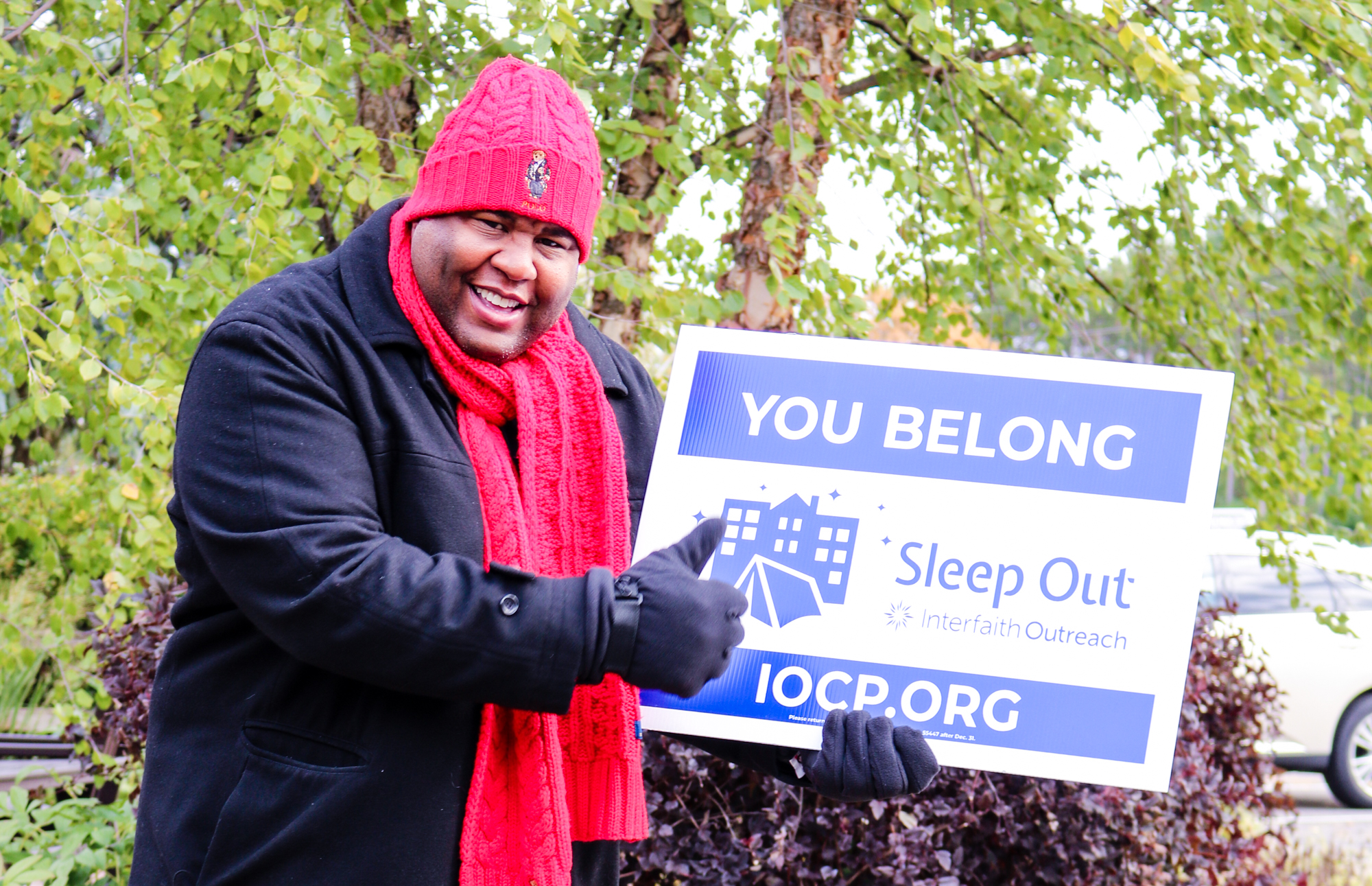 The eight-week series of events and experiences seeks to raise awareness and $3 million to prevent homelessness and create opportunities for families and individuals in the community to thrive.

The annual Sleep Out addresses the emergency needs of neighbors and delivers services in the areas of food, housing, education, transportation, employment and family support.

This year’s fund raising campaign launches Saturday, Nov. 13 with a virtual kickoff and community-wide Sleep Out (or Sleep In for people wanting to stay indoors) where the community will come together safely outside in the parking lot at Interfaith Outreach to officially kick off the campaign. In addition, gifts received on Give to the Max Day on Thursday, Nov. 18 will be matched up to $200,000.

“The needs of the community are greater than ever, and that’s why we’ve stepped up our fundraising goal to $3 million this year,” said Kevin Ward, Interfaith Outreach executive director. “Today, rising
housing costs, underemployment, the cost and lack of access to childcare and healthy foods are just a few of the burdens our neighbors are facing, and the added strains of the pandemic will have lasting effects on individuals and families living in poverty for years to come.” 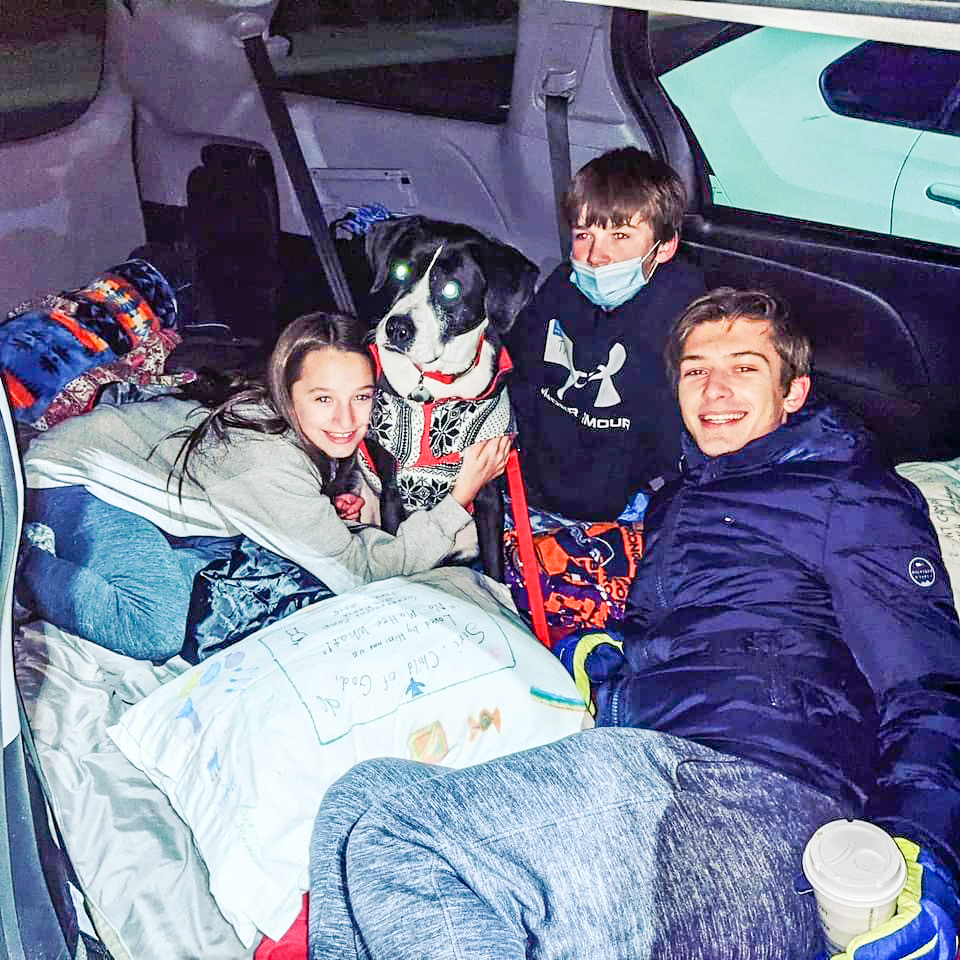 According to Wilder Research, 14% of people living in Interfaith Outreach’s eight-city service area in the west metro are living in poverty. For a family of four, that’s $26,500 a year, an income level that can scarcely cover even the most basic needs such as rent which is $1,467 on average. Last year more than
200 Interfaith families experienced homelessness.

According to Second Harvest Heartland, in September 2020, 1 in 9 Minnesotans – including 1 in 6 kids – didn’t know where their next meal would come from.

The Interfaith Outreach Food Shelf is now a certified SuperShelf, serves hundreds of households per week including in-person and home delivery food distribution, and 44% of the people served at the Food Shelf are children. All of these efforts are largely possible thanks to the annual Sleep Out, which raises 40% of
the organization’s budget in eight weeks.

View the entire schedule of events at IOCP.org.

Posted in Interfaith Outreach and Community Partners, IOCP Sleep Out
no comments yet

The Wayzata football rallied from two consecutive losses in early October to win their final four games and qualify for the state Class 6A playoffs. The Trojans (8-2) meet St. Michael-Albertville (6-4) in the quarterfinal round Thursday at 7:00 pm at Park Center High School. Wayzata beat STMA 34-14 during the regular season. The Trojans won the state Class 6A championship in 2019, the last time the state playoffs were held. Next week’s playoff semifinals and the Prep Bowl on Thanksgiving weekend are held at U.S. Bank Stadium.

Posted in Wayzata Football, Wayzata Trojans
no comments yet
Next Page